Your new birthday made possible!
Learn about AriaMedTour’s all-inclusive facilitating packages for a surprisingly convenient sex-change journey in Iran.

Your new birthday made possible!
Learn about AriaMedTour’s all-inclusive facilitating packages for a surprisingly convenient sex-change journey in Iran.

Whether you are considering Sex Reassignment Surgery for yourself or someone you love, taking the steps forward to move up with the transition can be daunting. Read more to find out why Iran should be one of your SRS destination options and how AriaMedTour can ensure a hassle-free and peaceful journey for you and/or your loved ones.

Gender reassignment surgery in Iran: All you need to know

Having gender reassignment surgery abroad is not an uncommon decision. Because, while the ideal option would be undergoing the complex surgery in your hometown, not all countries offer the type of procedure you seek with the quality you deserve and at the price you can afford. As a result, medical tourism has emerged as a popular alternative for many transsexuals. Iran is considered a “paradise” for many. The extensive experience of Iranian specialists coupled with low costs of the surgery have enticed tons of patients from Arab and East-European countries to undergo SRS in Iran.

Gender reassignment surgery is indisputably a very complicated procedure for both male and female transsexuals. It is often performed through multiple steps and has considerable downtime. It might seem even more bothersome if you are considering SRS overseas. That said, here are three main reasons why undergoing gender confirmation surgery in Iran could be the ideal solution you are seeking.

You will experience world-class quality healthcare: Iran is the second most popular destination for gender reassignment surgery. This has provided Iranian surgeons and the healthcare centers with extensive knowledge and experience in both female-to-male and male-to-female transition procedures. Iran is the most developed country in the region in using the latest techniques for a successful gender reassignment surgery.

Sex reassignment surgery in Iran is affordable: Due to the country’s economic factors, Iran’s top-rated healthcare services are exceedingly cheap. Gender reassignment surgery, for example, can cost half or even third of that found in the European countries or the USA. (about $7000)

You can count on AriaMedTour: AriaMedTour strives to offer the ultimate facilitating and care assistance packages to international patients. By having us take control of your journey, you will have the surgery alone to be concerned about, leaving the rest to us. Our treatment plans include but are not limited to the following services: 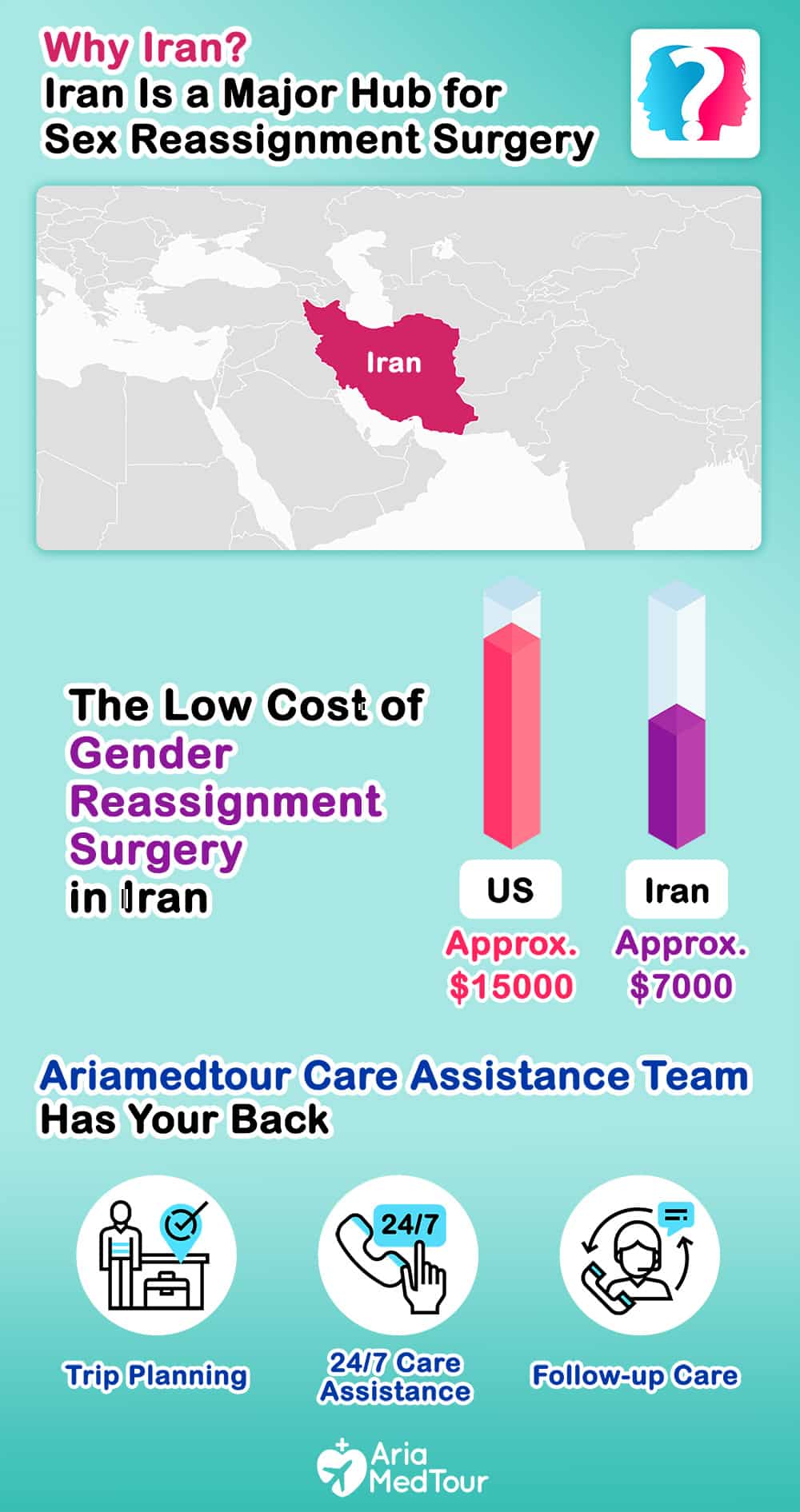 What is Gender dysphoria?

First off, let us learn a little bit more about the condition that SRS patients face. Gender dysphoria is referred to as a condition that makes the person feel a mismatch between their emotional and biological gender. In other words, they have the idea of having been born in the wrong body. The symptoms often appear when puberty hits and can drastically deteriorate if not addressed properly.

People with gender dysphoria, also known as transsexuals, usually face drastic social ignorance and bullying. In severe cases, they might even be led to have suicidal thoughts.

Nowadays, however, sex-change surgery has made it possible for transsexuals to embrace their true gender. In countries like Iran where SRS is both legal and in accordance with religious laws, the surgery has become exemplary popular, with most patients reporting 96% satisfaction with the results.

SRS or Sex Reassignment surgery is also known as gender reassignment surgery, gender confirmation surgery, and multiple other names. By changing the biological gender of the person, SRS helps the patient have a physical appearance that matches his or her identified gender. Depending on whether it is FTM (female to male) or MTF (male to female) the surgery can take many forms including bottom surgery and top surgery. While some steps of the process are crucial in maintaining a satisfactory transition, others could be optional. Contact us the get a thorough consultation about different surgical options available for you.

Following hormonal therapy, most female transsexuals will find that their breast size has increased. Yet, most patients seek breast augmentation (augmentation mammoplasty) to enhance the effect and achieve a more feminized body. The top surgery procedure varies depending on your desired chest size, the type of implants, and the techniques that your surgeon uses.

Learn more about having breast implants in Iran: Breast augmentation in Iran

Usually, the surgeon will discuss different options for SRS bottom surgery based on your general condition and the alterations that you desire. As part of the treatment for female transsexuals, male to female sex reassignment surgery usually involves two main steps.

Also known as body masculinization, FTM surgery is part of the treatment for gender dysphoria in male transsexuals. The surgery can help the person match their physical appearance with the gender they identify with.

Also called man chest reconstruction, it is a surgery for transsexual men and involves a variety of procedures to remove breast tissue, offering a more masculine chest. The surgery is quite similar to mastectomy or breast reduction surgery.

You should discuss your expectations with the surgeon. Then, he or she will come up with a surgical plan that suits you best. Here are some of the main procedures involved in the FTM gender reassignment surgery:

Usually, 4 to 6 days of hospitalization is needed after FTM sex-change surgery. Complete recovery can take up to 6 weeks.

How to prepare for sex change in Iran?

Individual cases are different in terms of their condition, expectations, and surgical goals. Therefore, each person’s preparation instructions could differ from another person. You can have a free consultation with our care specialists to learn more about changing your gender in Iran. Here are some general dos and don’ts before gender reassignment surgery.

How long should I stay in Iran after gender reassignment surgery?

The length of your stay is determined by the type of surgery. For minor surgeries, you can stay for two weeks while for more complicated procedures, you might be advised to spend a month in Iran.

How long does it take to recover from bottom surgery?

The surgery is usually followed by 3 to 6 days of hospitalization and a week of close supervision. You may get back to work after 6 weeks.

The surgery is performed while you are under general anesthesia. Therefore, you won’t feel any pain during surgery. During recovery, moderate pain is normal and can be controlled with pain medications.

Can you get bottom surgery at 16?

In most cases, you cannot undergo the surgery if you are under 18 years old. Yet, some physicians might suggest getting hormonal treatment during puberty to get the most of the surgery when the day comes.

As an FTM surgery patient, how will my sexual functions be after the surgery? Can I have an orgasm?

It depends on the type of surgery. If you have had phalloplasty, then you can perform penetrative sex but erection is unlikely to happen on its own. You can also enjoy orgasms similar to biological men. After metoidioplasty, the other type of ftm bottom surgery, you can not have penetrative sex but you can experience orgasms nevertheless.

As an MTF surgery patient, how will my sexual functions be after the surgery? Can I have an orgasm?

Once your recovery period is over, you will be able to enjoy sex just like a biological woman.

Can I have a baby after the SRS surgery?