Not satisfied with the shape of your ears? Not to worry. Thanks to the new plastic and reconstructive surgery techniques, any ear deformity you are suffering from can be easily corrected. Whether you have protruded ears, Stahl’s ears, ear tags, cup ears or other conditions that are bothering you, we help you restore your confidence with a simple otoplasty surgery by the most experienced plastic surgeons in Iran.

All inclusive Otoplasty Packages in Iran 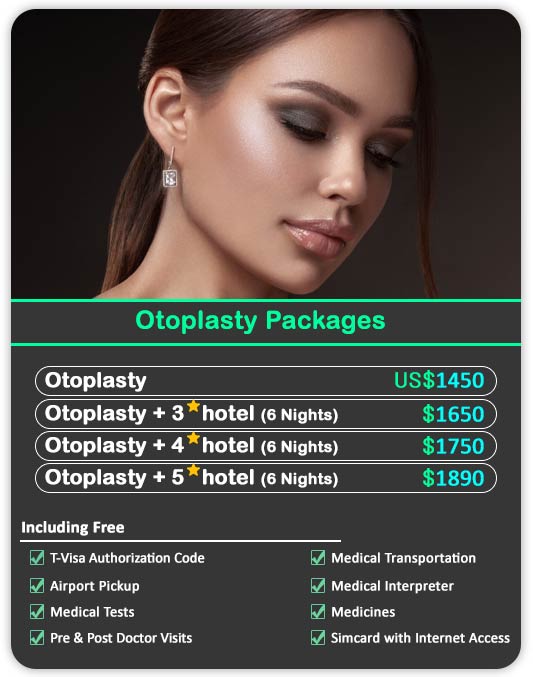 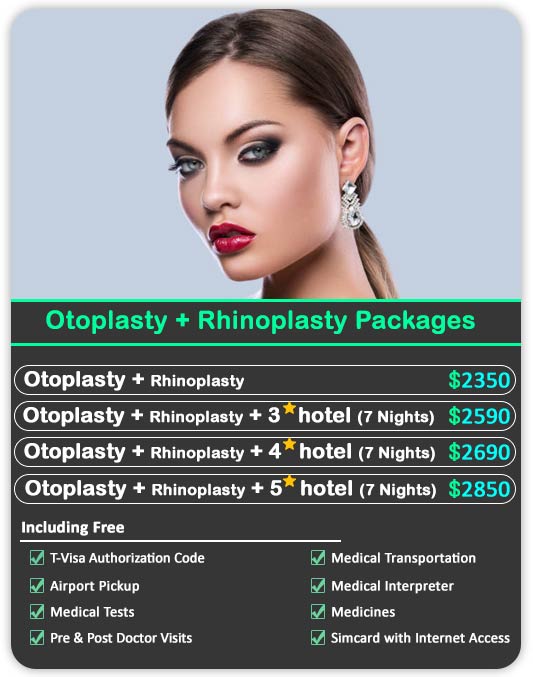 All inclusive Otoplasty Packages in Iran


Note :
* The medicines and other aftercare items included in this package are the necessary items prescribed by the surgeon.
Also, the doctors and hotels and clinics which are included in the package are offered by AriaMedTour to the patient. There may be other doctors whom the patients are considered and the price might be different.
It is highly recommended to bring a companion with you for this surgery as it will facilitate your stay and recovery after the surgery.
In Microtia surgery cases the duration of stay is probably more than 7 days. Based on a new policy of the Ministry of Foreign Affairs, the citizens of the USA, UK, and Canada are included in different logistic services.

Take a look at ‘before and after’ photos of people who got their ear surgery done in Iran. 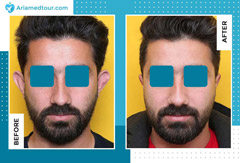 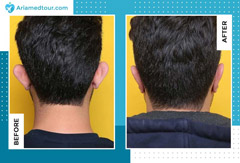 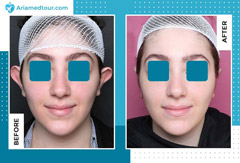 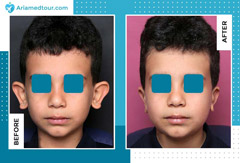 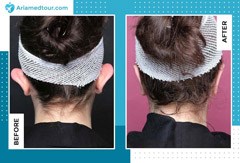 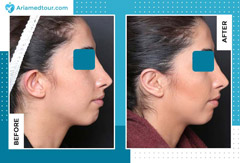 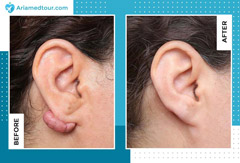 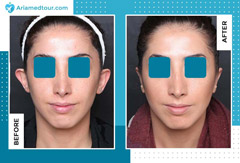 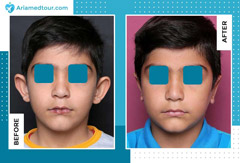 Take a look at ‘before and after’ photos of people who got their ear surgery done in Iran.

Your detailed schedule after arrival in Iran

>> Day 1: Arrival at airport: you will be welcomed by our guide, then picked up and transferred to hotel*. Checking into hotel; Transfer from hotel to clinic; Visiting the doctor; Pre-op tests; Transfer from clinic to hotel

>> Day 6: Taking shower at hotel; transfer from hotel to clinic; check-up and bandage removal (by the doctor)**; reviewing post-op instructions and dos & don’ts; receiving written certificate from doctor confirming patient is fit to fly; transfer from clinic to hotel.

>> Note:
* Transfer from the airport to the hotel will be with the taxi.
** The doctor visit may be in the 7th or 8th day depending on the circumstances.
*** In some cases where your departure is in the weekends this step may not be feasible.

We work with a select group of three- to five-star hotels in Tehran and other cities. Depending on the type of package you choose and the location of the hospital or clinic where you are going to receive the treatment, we arrange the most suitable hotel for you. The name, details, and photos of the hotel will be sent to you ahead of time.

Otoplasty in Iran: All you need to know

Otoplasty or cosmetic ear surgery is a plastic surgery intended for correcting the deformities of the ears. Otoplasty is offered at Iranian cosmetic clinics and hospitals at very affordable prices. There are a host of highly-skilled Iranian plastic surgeons performing otoplasty in Iran, who specialize in plastic surgery, including ear reconstruction surgery and ear pinning.

Just like any other plastic surgery, the price of cosmetic ear reshaping surgery in Iran is much more affordable than many other countries. Depending on the type of surgery, doctor, and clinic, an otoplasty surgery costs between $1200 and $2000 in Iran (Please note that this is simply a price range for ear surgery in Iran. Our prices are usually somewhere near or above the average of this range given our quality of services and the expertise of our surgeons).

At AriaMedTour, we offer all-inclusive ear surgery packages that come with all medical tourism services (visa, hotel, transfer, etc.) at various prices to fit all budgets. The prices we offer for otoplasty in Iran are transparent and cover all expenses, including anesthesia and medications, things that usually have separate costs in other countries.

Iranian otoplasty surgeons we work with are well-trained and experienced, who have performed hundreds of ear reconstruction surgeries during their prolific career, spanning more than 10 years. Our plastic surgeons offering cosmetic ear surgery in Iran are plastic surgery or ENT specialists who have passed advanced fellowships and specialized courses in plastic and reconstructive surgery.

What is otoplasty surgery and what does it fix?

Otoplasty is any type of ear correction surgery aimed at improving the appearance of the ears by altering the shape, proportion, and position of them. Ear reshaping surgery is sought by people who are unhappy with their congenital or acquired ear deformity, including those with prominent ears (protruding ears), Stahl’s ears, cup ears (also called lop ears and constricted ears), ear tags (also known as accessory tragus or branchial cleft remnants), and ear defects caused by an injury or accident.

Technically called otopexy, ear pinning (sometimes referred to as ear pinback) is a common ear reshaping surgery for flattening protruding ears. Ear pinning surgery is commonly carried out for children, but adults, too, can undergo this procedure if they feel dissatisfied with their appearance.

Ear augmentation surgery is aimed at enlarging or reconstructing the ears in people who suffer from a condition called ‘microtia’, in which the external part of the ear (pinna) is underdeveloped or non-existent. There are three approaches to ear reconstruction surgery: Rib Cartilage Graft Reconstruction, polyethylene plastic implants (Medpor), and ear prosthesis.

Sometimes the pinna of the ear is larger than normal. This congenital deformity is technically referred to as ‘macrotia’. Ear reduction surgery is intended to reduce the size of too large ears by removing a portion of the cartilage and skin.

How is otoplasty performed?

Cosmetic ear surgery can be done by a plastic surgeon or an otolaryngologist. It is performed either under local or general anesthesia, depending on the age of the patient and other factors. An otoplasty procedure takes between 2-4 hours.

The surgeon makes incisions to the ears, and depending on the problem, alters the cartilage of the ear. He/she can reduce the size of the ear and pin it back to prevent them from sticking out, reshape the cartilage, or reconstruct it in cases with microtia.

As said earlier, there are three methods for ear reconstruction surgery. The first technique involves taking a piece of the patient’s own rib cartilage and sculpting it into the form of an ear. This procedure is usually done at the age of 8 when the child’s rib cage is large enough to provide the donor tissue, but some of the more experienced surgeons may do this surgery on a 6-year-old child.

If the polyethylene plastic implant method is employed for ear reconstruction, it can be performed on a child at the age of three. MEDPOR ear reconstruction is a one- or two-stage procedure involving placing a porous polyethylene implant on the underdeveloped ear, allowing the patient’s tissue to grow into the material. 3 to 6 months after the surgery, a second appointment may be required for minor adjustments.

Ear reconstruction with ear prostheses is another technique in which an ear-shaped prosthesis is attached to the missed or underdeveloped ear using adhesive or titanium screws with the aim of improving the appearance. Ear prostheses are colored in a way to match the color of the surrounding skin so that they look as they are real ears.

What should I do before ear correction surgery?

There are some general guidelines that should be followed before an otoplasty procedure, which are as follows:

After the completion of an ear reshaping surgery, the surgeon applies soft dressing on the surgical site, which should be kept in place for one week. The surgeon may also prescribe a soft, flexible headband for two weeks after surgery, which helps hold the ears in the right position.

The bandage should be replaced the next day after the surgery, and then again after 2 days. The bandage is completely removed after 7 days. You can wash your head after the bandage removal and wear the protective band over your ears for a one more week or two.

There might be some mild discomfort or sleep disruptions for a few days after surgery. Make sure to ask your doctor to prescribe the right pain medications if you need to take some. Do not self-prescribe anti-inflammatory pain drugs because they can slow healing and cause bleeding.

Be sure to protect your ears from cold, and in order to prevent any infections, avoid swimming during your recovery period. Sports and physical activities can be resumed after approximately 5 weeks. You can return to work in a few days.

As with any surgery, there are some risks in otoplasty, but they are minor and rare. Scarring is a side effect of ear correction surgery, which in most cases is barely visible because it is located behind the ear.

Bleeding and infection are other potential complications of otoplasty, which rarely occurs if you take good care of yourself. Mild or moderate pain is common after surgery, which can be relieved by taking pain-killing medications.

Be sure to contact your doctor or seek medical attention in case you experience fever and excessive bleeding and swelling, or you have any trauma to your surgical site.

Am I a candidate for otoplasty?

If you feel self-conscious about your protruding ears or have other ear deformities that are causing you to feel embarrassed in social situations, otoplasty can help you regain your self-confidence. Although ear reshaping procedures are commonly done in children, men and women well into their 40s or 50s can also consider undergoing otoplasty to improve their appearance. Ear corrections surgery candidates should also have good overall health and realistic expectations.

How much does ear reshaping surgery cost?

It depends on many factors, such as the country where the surgery is done, the doctor’s reputation and experience, type of surgery, etc. For a price quote for otoplasty in Iran with AriaMedTour, feel free to contact us.

Scars after surgery are hardly noticeable because they are well hidden behind the ears.

Cosmetic ear surgery doesn’t hurt while is being performed because either local anesthesia is applied, which numbs the surgical area, or general anesthesia is used, which puts you to sleep.

As long as it is done by a qualified surgeon and you follow post-op instructions, ear correction surgery is one of the safest procedures.