Get rid of your problematic tonsils and/or adenoids
at the best hospitals in Iran at fair prices.

Get rid of your problematic tonsils and/or adenoids at the best hospitals in Iran at fair prices.

They are intended to protect your body against illnesses but sometimes they themselves cause trouble and do more harm than good. We’re talking about tonsils, a pair of soft tissue masses located at the back of the throat that are part of our immune system. Luckily, tonsils can be removed without the immune system being much affected. If you’re suffering from a tonsil problem and are looking for an affordable tonsillectomy in Iran, do not hesitate to fill out the above form for details. Also, read on to learn more about tonsillectomy.

Tonsillectomy in Iran: all you need to know

Tonsillectomy is a commonly performed ENT procedure in Iran. Iranian ENT specialists are all well-trained to perform tonsillectomy in both children and adults and there are numerous hospitals in Iran that offer tonsil removal surgery.

Thanks to the skilled ENT surgeons and the top-notch medical facilities in Iran, as well as the low cost of healthcare services (including tonsillectomy and adenoidectomy) many people opt for Iran to get their own or their children’s tonsils removed. In short, proficient surgeons, advanced hospitals, and reasonable prices are the three main reasons Iran is a good choice for those who want to have tonsillectomy abroad.

Tonsillectomy, as the name suggests, is the surgical removal of the tonsils, the two oval-shaped pads located at the rear of the throat (pharynx). This common procedure is often done for children with recurring or chronic infection and inflammation of the tonsils (tonsillitis) but it can also be used to treat sleep disorders and breathing problems caused by the enlargement of the tonsils. If adenoids are also removed at the same time, the procedure is called an adenotonsillectomy, which is the combination of adenoidectomy and tonsillectomy.

What are tonsils and what do they do?

Technically, there are three types of tonsils: palatine tonsils, pharyngeal tonsils (adenoids), and lingual tonsils. The palatine tonsils — sometimes called faucial tonsils but often simply called tonsils — are two separate small masses of lymphoid tissue located at the root of the tongue at the back of the throat. They are the only type of tonsils that can be directly seen when we open our mouth.

When we speak about tonsils we usually mean the first type, and tonsillectomy refers to the removal of the very tonsils. Tonsils are part of the body’s lymphatic system, which in turn is part of the immune system. Tonsils act as goalies for the body, meaning they prevent harmful viruses and bacteria from entering the body through the oral cavity. They also contain immune cells that produce antibodies for killing germs and preventing throat and lung infections.

The adenoids have a similar function as the palatine tonsils. They are located at the end of the nasal cavity behind the soft palate. Adenoids naturally shrink as children grow up and often completely disappear by the time they reach adulthood.

Who needs a tonsillectomy or adenoidectomy?

Tonsillectomy is most often done in children, but any individual at any age might need to have the surgery. This procedure is done in people who suffer from any type of tonsil condition that is not responsive to non-surgical treatments. One of the main conditions requiring tonsillectomy is tonsillitis, a medical term referring to any type of inflammation and viral or bacterial infection in the tonsils including a severe sore throat called strep throat. 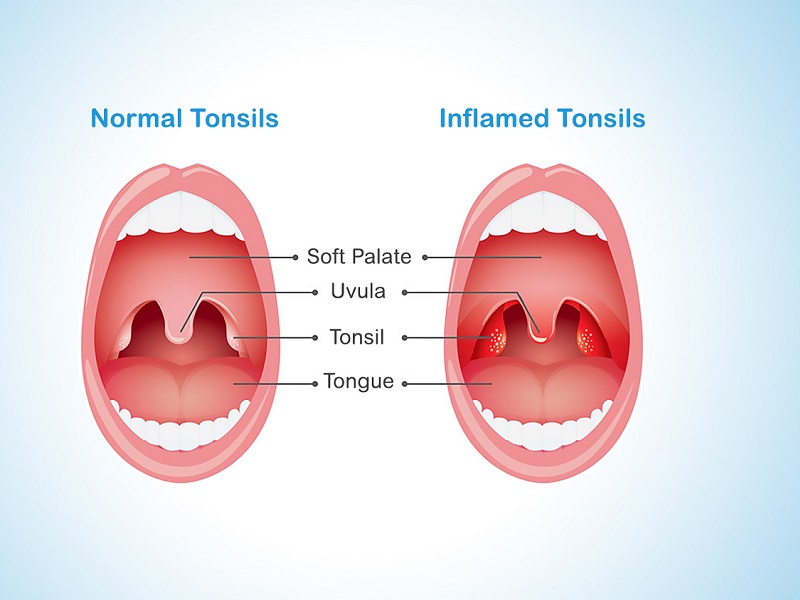 That said, one incidence of tonsillitis does not mean that you need to get your tonsils removed. The surgery is usually recommended for cases who’ve had at least seven tonsillitis occurrences in the last year or 5 episodes during the last two years each.

Tonsillectomy is not a treatment for tonsillitis only. People who suffer from any of the following problems can also be candidates for this procedure:

Although tonsils are not as useless as they have been thought to be for years, sometimes they become so troublesome that makes tonsillectomy indispensable.

Just like tonsils, adenoids can become unhealthy and create problems sometimes. In cases that the adenoid conditions cannot be treated with non-surgical alternatives such as antibiotics, adenoidectomy remains as the last option, which can be done with or without tonsillectomy. Adenoidectomy is typically recommended for people with the following conditions:

Tonsillectomy preparation: what to expect before surgery?

Your doctor will ask about any medications or supplements you take, including vitamin and herbal supplements and over-the-counter pills such as aspirin. Doctors often ask patients to stop taking certain medicines several days before surgery.

For instance, you will probably be asked to stop taking anti-inflammatory medicines including aspirin, ibuprofen, and naproxen, as well as supplements containing St. John’s Wort, and Ginkgo biloba two weeks before surgery.

Anti-inflammatory drugs are prohibited before tonsillectomy because they increase bleeding during the operation. If you plan to have your surgery in Iran with AriaMedTour, your personal coordinator will explain to you the dos and don’t you should start to follow several days before your surgery appointment.

Furthermore, your doctor may ask you about your medical history, reactions or allergies you have to certain medicines, history of bleeding problems or problems with anesthetics in your family.

You also need to be fasting before going under the knife starting from midnight before the surgery, meaning you shouldn’t drink or eat anything after midnight.

It is important to plan ahead for your post-op recovery at-home. Be sure to arrange for someone to take care of you and help you do your daily chores and prepare meals during the first couple of days following your surgery.

How to help my child get ready for tonsillectomy?

A 3 or 4-year-old child doesn’t know anything about tonsillectomy and this is the parents’ responsibility to help them prepare for the surgery. If your child is going to have their tonsils removed, apart from the above-mentioned preparatory points, you need to take further steps as a parent to help your kid get ready for a tonsillectomy. Here are some tips for preparing your child for the surgery:

How is tonsillectomy done?

Tonsillectomy or adenotonsillectomy is performed under general anesthesia, meaning the patient will be put to sleep and won’t feel anything while the operation is being done. Tonsillectomy is normally an outpatient procedure and doesn’t require an overnight hospital stay for adults but children might need to spend a night in the hospital. It takes less than an hour and the patient can go home 2-4 hours after surgery if there is no need for overnight stay.

Surgeons adopt different techniques for tonsils and adenoids removal. A common technique is using scalpels, which is called “cold knife (steel) dissection” method. Some surgeons prefer other methods, including cauterization (burning), ultrasonic vibration, laser, or cold temperature to remove tonsils. There is no big difference among them and the results and recovery time are almost the same.

After the completion of the surgery, the patient is taken to the recovery room to be taken care of. Once the anesthetic wears off and the patient wakes up, they may feel sick and even vomit, which is a result of the anesthesia and is common.

There are some discomfort and pain after adenotonsillectomy. The patient might have a sore throat and a pain in the jaw, neck, or ears. Getting plenty of rest during the first days after surgery is crucial for a comfortable recovery. Patients should also drink enough water to keep their body hydrated, which is essential to a good recovery.

Tonsillectomy patients should avoid hot, spicy, hard, and crunchy foods (such as French fries) for a few days after surgery to prevent damage to their surgical areas. Instead, they are recommended to eat soft and plain foods such as mashed potatoes, clear broth, applesauce, ice cream, and gelatin, which are easy to swallow. However, as dairy products should be avoided during the first 24 hours after surgery, patients should go for ice creams that don’t contain milk.

Patients might snore during the first 2 weeks after tonsillectomy or adenoidectomy. This is normal and should not be a cause for concern. You should contact your doctor if this lasts for more than 2 weeks or you have breathing problems after the same period of time. Also, seek medical attention if you have a high fever and bleeding (dark spots of blood in the mouth or nose are normal).

It takes 10-14 days for children to recover from tonsillectomy but this may take a little more time for adults. Tonsillectomy patients can normally go back to work in two weeks.

What are the risks and complications of tonsillectomy and adenoidectomy?

How much does a tonsillectomy cost in Iran?

Prices for a tonsillectomy and adenoidectomy in Iran start at $700, which is considered reasonable compared to costs in other countries. A tonsillectomy in the United States, for instance, costs between $3200 and $8500 and the average cost of tonsillectomy in Turkey is $3000.

Please send us a message to learn about our tonsillectomy, adenoidectomy, and adenotonsillectomy prices in Iran.

Taking the tonsils or adenoids out doesn’t have a significant short-term impact on the body’s immunity against diseases. However, recent studies suggest that removing the tonsils can negatively affect our immune system in the long term, including a higher risk of disease in the respiratory tract. That said, there is still no conclusive evidence that tonsillectomy and adenoidectomy can significantly weaken our immune system.

Since it is done under general anesthesia, you won’t feel any pain during the surgery but once you wake up, you will feel some pain in your throat and neck. The pain following a tonsillectomy can be managed by taking painkilling medications as prescribed by your doctor.