Get revolutionary CoolSculpting in Iran to remove stubborn fats at affordable price with AriaMedTour.

Get revolutionary CoolSculpting in Iran to remove stubborn fats at affordable price with AriaMedTour.

CoolSculpting is a non-surgical procedure, meaning that it does not involve any cutting or wounds, which makes it by far safer than liposuction. All this has made this procedure very popular nowadays, that is why we are going to tell you all you need to know about CoolSculpting in Iran.

Why Iran for CoolSculpting?

Iran is one of the best 10 countries in the world in performing plastic and aesthetic surgery, including the non-surgical procedures such as CoolSculpting. By having CoolSculpting in Iran, you can ensure that your procedure is done by a proficient doctor using the best and most modern devices.

AriaMedTour will be beside you from your first moment to give you a specialized consultation while you are at rest in your home country until you have your procedure done and have returned back home. This includes airport pick-up, accommodation, interpretation, local transfer and much more.

How much does CoolSculpting in Iran cost?

The cost of coolSculpting depends on many factors, such as the treated area of the body, the proficiency of the doctor and the reputation of the clinic among others. In general, CoolScuplting costs about $2,000 to $4,000 per session in the western counties, which is a huge sum. However, you can undergo a CoolScuplting in Iran by one of the best doctors in a modern center equipped with the most advanced devices in the world at a cost as low as $200 per session for each area.

Our Cosmetic Procedure Patients Have Something To Tell You

See why people choose us as their facilitator to get their cosmetic procedure done in Iran.

CoolSculpting in Iran: all you need to know

For many years, plastic surgeons have been using procedures like liposuction to remove stubborn fat that is hard to get rid of through diet and exercise. CoolSculpting, or cryolipolysis as it’s called, is a new treatment that is used for the same purposes. 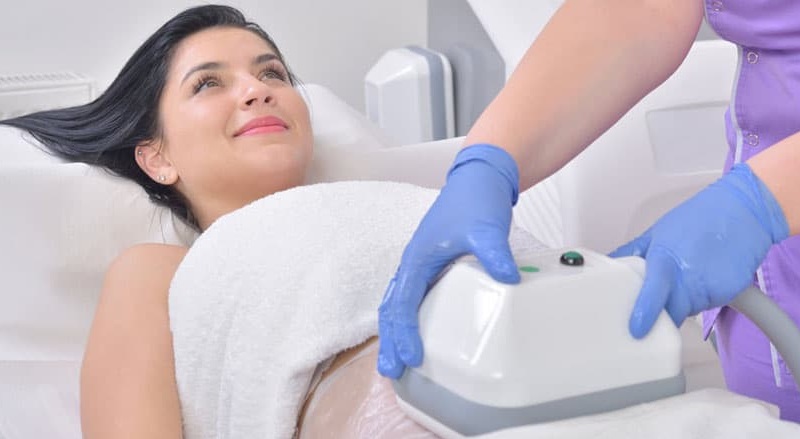 In the last ten years, a new technique that uses freezing to get rid of stubborn fat was approved by many health organizations around the world, including the FDA. The concept of this procedure is using freezing temperatures to destroy fat cells and ‘sculpt’ the body, and that is why it was called CoolSculpting.

The freezing temperatures break down only the fat cells and don’t affect other types of cells, which makes this procedure very safe. It lasts only an hour, in which the doctor uses the machine to vacuum the skin above the fatty tissue that we want to get rid of, and you will not feel anything other than cooling sensation and a little bit of numbness.

After the procedure is done, no recovery time is needed because it is a noninvasive procedure, but some people experience some sort of soreness, which is completely harmless and fades away soon.

The estimated fat amount that is broken down by each CoolSculpting session is around 20 percent of the entire fat of a certain area.

Since it was approved, a lot of research was conducted on CoolSculpting, and the results are indeed very promising. As we said, it is estimated that an average of 20 percent of the fatty tissue will break down with this procedure. These numbers were measured by doctors and researchers using different methods and even ultrasound.

A lot of research was also conducted to ensure the safety of this procedure, and the results are very comforting. The researchers didn’t find major side effects after this procedure or any evidence of any harm to the body tissues.

Another thing worth noting is that researchers didn’t find any proof of reduction of the lipid levels in the blood, which means that this procedure is purely cosmetic and it can’t be used instead of diet or exercise as a treatment for diabetic or cardiac problems.

But unfortunately, these researches are somehow limited. The numbers of participants were a little bit low and the researches followed up the participants for only a short time after the procedure. That is why a lot of professionals feel the need of conducting more comprehensive studies with longer follow-up periods. But as we said, the results are very promising so far.

What are side effects of CoolSculpting?

As we said, the researchers didn’t find any proof of any harm to the body tissues after CoolSculpting, which makes this procedure relatively safe. However, some patients reported some side effects like numbness and skin redness and localized pain. The most reported complication of CoolSculpting was the reduction of sensation in the treated area.

A rare complication called paradoxical adipose hyperplasia was also reported after cryolipolysis. in this condition, the affected area becomes larger due to fat accumulation, which results in a painless lump. Fortunately, the incident of this complication is only around 0.005 percent of all patients undergoing the procedure and it is treatable.

Are the side effects of CoolSculpting permanent?

Once the fat cells are destroyed, they are gone forever. But the body can always make new fat cells to replace the old ones. That is why it is very important for the patient to have a full lifestyle modification, meaning healthy diet and exercise, after undergoing CoolSculpting to maintain the desired appearance.

It is not easy to answer this question because the cost of this procedure is different from one country to another. It also depends on the experience of the doctor performing the procedure, the device used, and the number of sessions required to affect the whole area.

The prices vary between $700 to $1500 per session. You can contact us for a price quote for CoolSculpting in Iran via email, WhatsApp, phone, or online chat.

What are the alternatives to CoolSculpting?

An obvious alternative to CoolSculpting is liposuction. Liposuction can get rid of fat faster in comparison to CoolSculpting, but it is an invasive procedure, which has its own disadvantages.

There are other noninvasive procedures that are used to get rid of stubborn fat like laser lipolysis, radiofrequency lipolysis, and injection lipolysis.

Who are candidates for liposuction?

Lipo is not recommended for all people and is not a good choice for all bodies. For instance, it is not appropriate for pregnant women, nursing mothers, or diabetics. But for whom is it really efficient?

People with a BMI (Body Mass Index) of 30 or less can benefit from this treatment. It means that the greater the body mass, the more risks, and less desired results.

Moreover, healthy people with a stable weight who need to shape their body in specific areas can undergo this body contouring surgery. In fact, the right candidate is someone who has tried to burn away his/her fat pockets through diet or hard work but has not succeeded in doing so. In this case, lipoplasty can let them achieve the look they want.

Lipo aims at eliminating the excess fat packed in certain parts of the body like belly, hips, thighs, arms, and love handles. Liposuction is a body-contouring procedure, not a weight-loss method or a solution to morbid obesity. If you’re overweight, you’d better go through a bariatric surgery rather than a lipo to lose a significant amount of weight.

As the surgery involves numbing, you won’t feel any pain during the procedure itself. After the numbing effect wears off, you will start to experience some levels of pain and soreness around the incisions or targeted areas. If needed, your doctor will prescribe some painkillers to help you get through the pain.

How can I reduce swelling after liposuction/lipomatic surgery?

Unlike other complications which subside within 2 weeks, swelling won’t disappear easily. It usually takes around 3 to 4 weeks for the inflammation to go away. To reduce swelling, you should wear your compression garment and apply ice compress on the treated spot. Having a healthy diet and walking on a daily basis can also help.

How can I get my Liposuction arranged in Iran?

Arranging a trip abroad for a surgery has its own challenges. From getting a visa, arranging doctor’s and hospital appointment, and booking a hotel, to post-op care, intra-city transportation, and the language barrier, there are many hassles in traveling on your own. AriaMedTour handles all this affairs for you in a professional fashion, without you having to take the risk of being swindled by unlicensed middlemen.

Check out the complete list of questions about Liposuction