All you need to know about nasal packing after rhinoplasty

All you need to know about nasal packing after rhinoplasty

A lot of people who are thinking about undergoing a rhinoplasty procedure, or a nose job, are concerned about nose tampons or nasal packing that is usually applied after the procedure.

The reason many people are concerned about nasal packing is that it may be very discomforting. In fact, it may be the most annoying part of recovery after undergoing a rhinoplasty procedure. That is why it is very important to know all about nose tampons, when they are used and their main advantages and disadvantages.

So we have decided to write this article in order to tell you all that you need to know about nose tampons after nose surgery.

What is nasal packing or nose tampon?

After performing a rhinoplasty procedure the surgeons usually apply a sterile cotton or gauze into both nostrils. This cloth, which is called tampon, is intended to absorb any blood or fluid that drains from the nose. This procedure is called nasal packing. 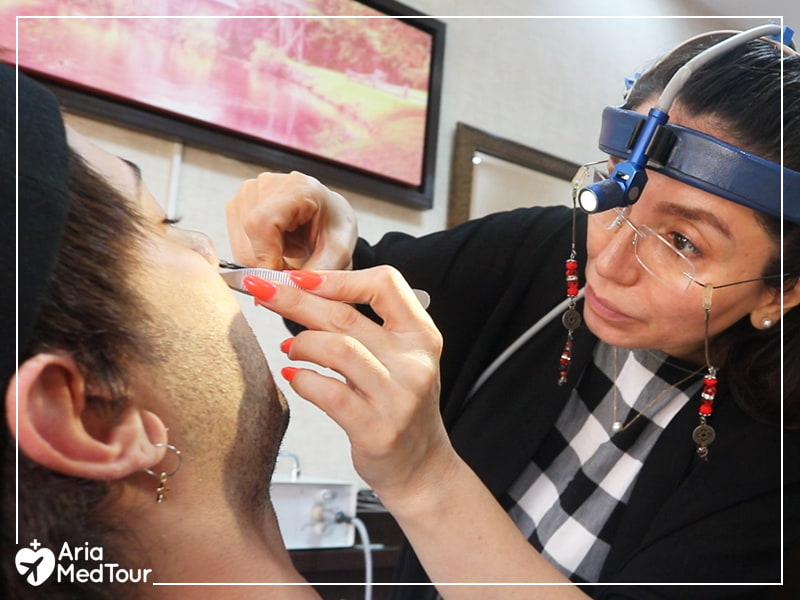 Tampons are placed into the nose to prevent bleeding.

When is a nose tampon needed?

The decision to pack the nose with a tampon after a rhinoplasty is completely up to the plastic surgeon performing the procedure. The surgeon usually takes this decision based on their professional experience and the condition of the patient.

Many years ago, most plastic surgeons used to apply nasal packing almost to every patient undergoing a rhinoplasty. But in recent years, many health organizations and institutions like the American Academy of Otolaryngology, Head and Neck Surgery have issued new guidelines against the routine use of nose tampons.

According to these guidelines, nasal packing is recommended only for special patients, for example, those who suffer from epistaxis or have complex unstable nasal fractures or other medical conditions that may cause a significant increase in bleeding. Also, the use of nose tampon is necessary when the bleeding does not stop at the end of the procedure.

Is there a difference between nasal packing after rhinoplasty and septoplasty?

Rhinoplasty is a procedure that is used to improve the appearance of the nose mainly for cosmetic reasons. But, septoplasty is a nose surgery that corrects a deviated septum.

Therefore, it is up to the plastic surgeon to decide, depending on the needs of the patient, whether or not to use nasal tampons.

When is the nasal tampon removed?

Actually, this is not an easy question to answer at all, because the proper time to get nasal tampons removed after a rhinoplasty procedure varies a lot.

Previously, many plastic surgeons used to leave the tampons packing the nasal cavities for several days after the procedure. Some would remove them after 7 days and others even after 14 days, but some complications would arose due to these long periods. That is why the trend has changed. 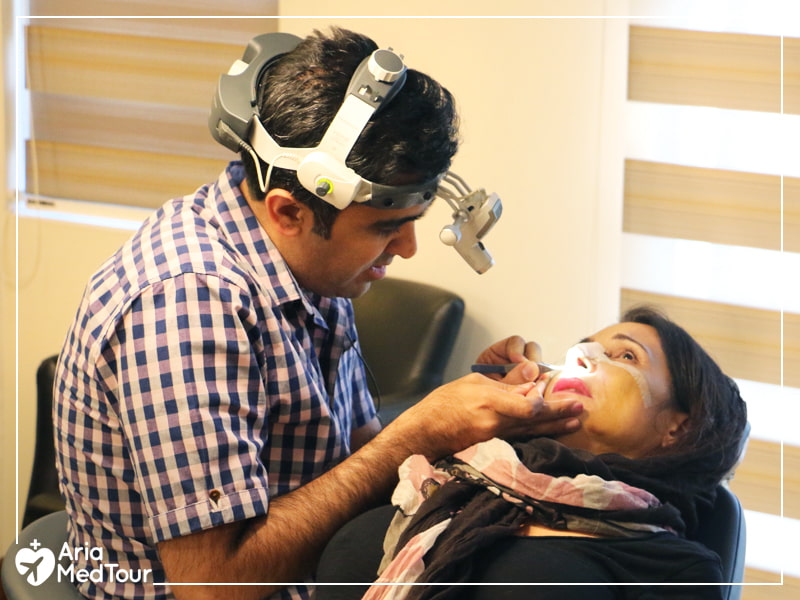 Nose tampons are removed within 4 to 24 hrs after the surgery while the splint remains up to 1 week.

This is one of the most frequently asked questions among patients regarding nose tampons. Unfortunately, the answer is yes, but the pain level varies a lot depending on the type of nose tampon used after the procedure.

There are many types of nasal tampons, some of them are dissolvable, which means that they dissolve at their own without the need to remove them by a plastic surgeon. But unfortunately these dissolvable tampons are rarely used after a rhinoplasty procedure, as they are used mainly to stop recurrent nasal bleeding especially in patients suffering from epistaxis.

The nasal tampons used after a rhinoplasty procedure are mainly undissolvable and need to be removed by hand. If the plastic surgeon decides to remove the nasal packing a few hours after the procedure, then he/she will do so before the patient is discharged from the hospital. But if he/she decides to do it later, then he/she schedules a post-operative appointment to check on the patient and remove the packing.

In order to make the removal of the nasal packing as comfortable as possible, the plastic surgeon will encourage the patient to have pain relief 15 to 20 minutes prior to the procedure. Then the patient would lie down on a bed or sit in a medical chair and the surgeon would start removing the nasal tampon from the nostrils. Meanwhile, he/she would check for any sign of bleeding by applying a little pressure to the mucous membrane of the nose.

If there isn’t any sign of bleeding after the removal of the nasal packing, the surgeon or the nurse will apply a bolster dressing. Afterward, the patient will be asked to rest in bed for 30 to 60 minutes to make sure no bleeding will occur, then if everything is okay the patient will be discharged to go home.

Another important thing is that there are many different commercial types of undissolvable nasal tampons, and scientists have conducted many studies trying to determine which one is accompanied with less pain while removing it. And while there is not conclusive results, some studies have showed, for example, that the removal of the Rapid Rhino nasal Tampon was accompanied by much less pain in comparison to the Rhino Rocket Tampon.

Why a nose tampon is applied?

The nose tampons are designed in a way that helps to achieve a full recovery after rhinoplasty while minimizing the complications of the surgery, and they help to reach this goal in many different ways, which include:

1. Providing hemostasis (stopping the bleeding) after a rhinoplasty or septoplasty procedure

3. Being a perfect solution to stenosis and adhesion after a rhinoplasty procedure

4. Providing occlusion, which improves wound healing and causes a moist milieu that can improve the body’s defense mechanism, causing fewer infections in comparison to open wounds.

What are the nasal packing disadvantages?

1. Nasal packing may cause discomfort for the patient, including a sensation of pain especially while placing and removing them, breathing difficulty due to a reduction in nasal airflow, increased nasal secretions, and an impaired sense of smell.

2. Nasal packing may cause damage to the endonasal tissues due to the pressure. It can cause superficial tissue damage which heals well on its own but it may also cause granulations (Pyogenic Granuloma) which carry the risk of bleeding. Also, excessive periods of pressure, especially with improper applying of nose tampons, may cause necrosis of the nasal tissues that can even reach the bony nasal structures.

3. Nasal packing may cause foreign body reactions which manifest as fibrosis of the basal and propria lamina and loss of superficial nasal epithelium.

4. A posterior dislocation of the nasal packing may occur if the nose tampons are not secured properly during placement. This complication is very dangerous as it carries a risk of obstruction of the larynx or trachea, so it is very important to warn the patient of it and teach them how to react if it happens.

5. Nasal packing may worsen the symptoms of obstructive sleep apnea syndrome, which is a common medical condition among the elderly and the obese.

6. Nasal packing may cause a temporary eustachian tube dysfunction, which can cause many symptoms like changes in hearing, fullness in the ears, and tinnitus.

7. Nasal packing, especially those made of latex, may cause allergic reaction, but this complication can be prevented by using one of the many latex-free nasal packing available.

8. Nasal packing can, though rarely, cause bacterial infections. But one of the most feared complication is toxic shock syndrome (TSS), which is a systemic condition that can lead to death due to septic shock. This condition is characterized by high fever, muscle pain, diffuse erythema, vomiting, diarrhea, tachycardia, and tachypnea, and it’s a result of a staphylococcal infection.

How to take care of your nose tampon?

If you have undergone a rhinoplasty surgery and nasal packing was applied then there are a few tips you should follow:

1. Try avoiding extreme body movements such as heavy lifting or sport that can dislocate the nose tampons in order to ensure that they stay in place.

2. If the nose tampons became clogged with blood or nasal secretions don’t remove them on your own. Instead, breathe through your mouth till you see your doctor.

3. Avoid blowing your nose for a week after surgery as it may dislocate the nasal packing and increase the bleeding of your wounds.

4. Avoid sneezing if possible, and if you couldn’t then do it with your mouth open.

5. Avoid antiplatelet drugs and anticoagulant drugs like aspirin or warfarin, because they may increase bleeding. So, if you are on one of these drugs consult your doctor and follow his instructions.

6. Consult your doctor immediately if you develop a high fever or any of the symptoms accompanied by the toxic shock syndrome mentioned above.

The good news is that you don’t have to follow a special diet or avoid any type of food when nasal tampons are applied.

That was all you need to know about nose tampons in rhinoplasty; but if you have more questions, feel free to consult us.