Why is Iran famous for rhinoplasty?

Why is Iran famous for rhinoplasty?

One cannot walk down a street in Tehran and not come across the signature of a nose job: bandages fixed on the nasal bridge. The craze for having a small, straight nose has been on the rise since a few decades ago among both women and men in Iran. Now Iran has the highest rate of nose surgery in the world, with more nose surgeries per capita than any other country. With people flocking to the country to get their noses done by Iranian doctors, Iran has become a rhinoplasty hub in the world. 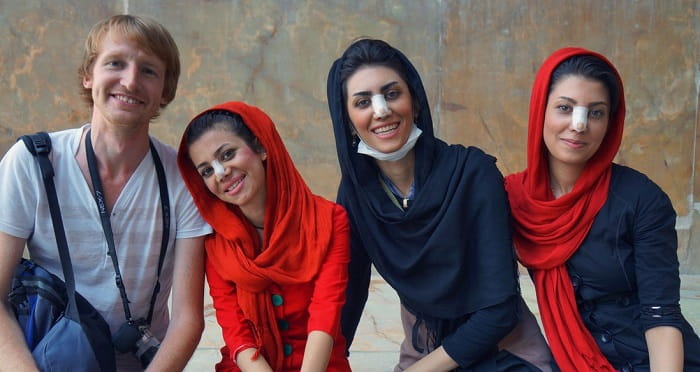 This is a familiar sight in Iranian cities as youths become more and more interested in cosmetic surgeries, particularly rhinoplasty.

There is no clear answer explaining why Iranians are so much into nose jobs, but one reason might be that Iranian people usually have less attractive noses, compared to other features of their faces. Prominent and Roman noses are common among Iranian people, making them good candidates for procedure.

In support of this theory, an Iranian plastic surgeon gives an explanation for the tendency:

“When you look at images of Persian kings from 2,500 years ago the typical characteristics of the Iranian nose were the same as they are now: Large, with a hump, and with a droopy nasal tip and thick skin,” he told the “USA Today”.

“This is undeniably the Persian nose. The shape of the eyes, lips, the cheeks – everything else about the face in Iran is generally excellent and very attractive, but our noses they are not so good,” he added.

In addition, the dress code of the country that obliges women to cover most of their body, is cited by others as another reason for women to show such a tendency for going under the knife.

“For ladies who have to cover themselves apart from the face, it is the only thing they can show,” another plastic surgeon based in Tehran told the Guardian.

“It’s human nature to want to seek out attention with a beautiful figure, hair, skin … but hijab doesn’t let you do that. So we have to satisfy that instinct by displaying our ‘art’ on our faces,” one woman says.

This high demand for rhinoplasty in Iran has created a ground for Iranian plastic surgeons to gain a vast experience in this cosmetic procedure in particular. Tens of thousands of nose surgeries are being performed in Iran annually. Some Iranian rhinoplasty surgeons are so prolific and popular that they do several nose job operations in a single day.

Not only in the capital Tehran, but also in many other cities across the country, cosmetic nose operations are performed by nose surgeons who have academic as well as practical expertise in the field. Hospitals and specialized clinics in cities like Mashhad, Shiraz, Isfahan, Tabriz, Kish Island, and other major cities offer quality nose surgeries to national and international patients.

The last comment needs to be approved.
0 Comments
Inline Feedbacks
View all comments
Scroll to top