Iran, commonly known to some as Persia, is a land whose impressive heritage not only offers magnificent ancient landmarks to tourists, but it also showers devotees of exotic oriental wisdom and culture with never-seen-before monuments to explore. This magical land of enchanting historic sites is ranked seventh among the famous UNESCO World Heritage Sites. Diverse ethnic communities inhabit different parts of Iran, 51 percent of whom are called Persians. What follows is a set of seven wonders of “the Land of Arians” as suggested by Tourism-review.com and in collaboration with Gapa Tour, a leading Iranian tour operator.

Located at nearly 60 km northeast of the city of Shiraz, Persepolis, once the undisputed cultural hub of the land of Persia, should be regarded as one of the most majestic and fascinating structural complexes the world over.

Founded by Darius I in 518 B.C, Persepolis was resting under heaps of sand when in the 1930s, it was unearthed during the excavations of a team of researchers led by Erich Frederich Schmidt.  Sadly, this captivating landmark was set on fire at the order of Alexander the Great and its remains are recorded as one of the greatest archeological sites in UNESCO Heritage Site. 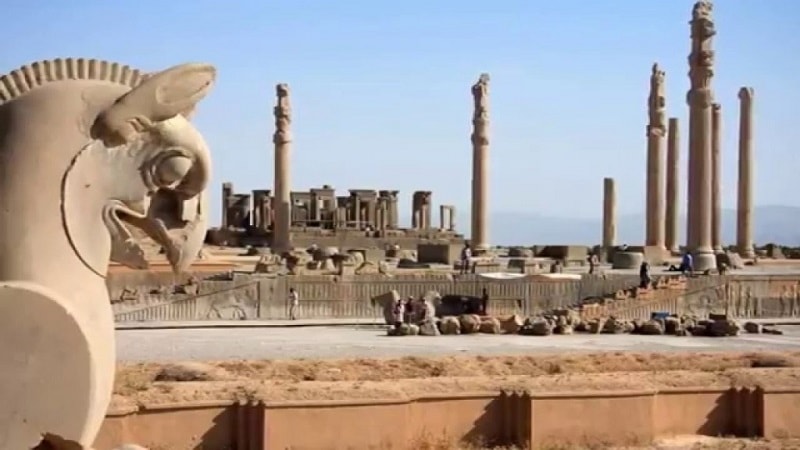 The historic Shah mosque which has been erected during Safavid era is located on the south side of the Naghsh-e Jahan Square. Certain features of the mosque such as seven-color mosaic tiles and calligraphic inscriptions represent the distinctive characteristics of Iranian architecture. The Shah mosque, also known as Imam Mosque, is encircled by four porticos and a few arcades. This elegant and glittering structure commonly known as one of the seven wonders of Iran is registered as a UNESCO Heritage site as well. 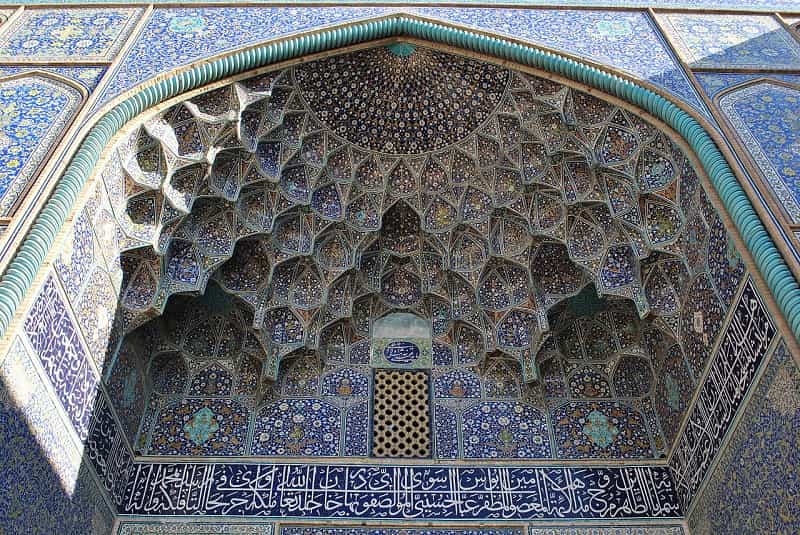 Situated in the south of the ancient city of Susa, Haft Tepe is one of the country’s most prominent archeological sites. Of the utmost archeological importance of Haft Tepe it would suffice only to mention that the ruins of Elamite city of Kabnak were discovered in this area. A large temple attributed to the god Kirwashir and his worshipers was found in this city as well and if all this is not enough, a funerary complex belonging to king Tepti-Ahar and his family which was discovered during excavations could also be mentioned as further evidence for the archeological significance of this ancient city. In addition to these historic sites, Ziggurat is yet another monument which builds upon the fame of the city, a magnificent addition to the already quite vast attractions of the city of Haft Tepe.

Located at the very heart of the city of Isfahan, Naqsh-e Jahan is a square whose construction dates back to the years between 1598 and 1629. The geographical location of the square is host to many other historic landmarks from the Safavid era such as Shah Mosque, the Ali Qapu Palace and the Mosque of Sheykh Loftollah. Naqsh-e Jahan is mainly regarded as the manifestation of Iranian and Islamic architecture.

Shiraz has always been famous for its natural sites and some of the city’s gardens are among the travel destinations which enjoy unparalleled fame and popularity among both locals and tourists. Eram garden is one of the most-visited ones in Shiraz. The very name of the garden is derived from the word “Iram” which in Arabic and the tradition of Quran is synonymous with heaven in English. The construction of the charming complex of the garden probably dates back to the Seljuq Dynasty (11th – 14th centuries) and under the rule of Ahmad Sanjar. The latter part of the 18th century (during the Zand dynasty) is regarded as the timeline for some of the major and minor reconstructions carried out in order to improve the garden. 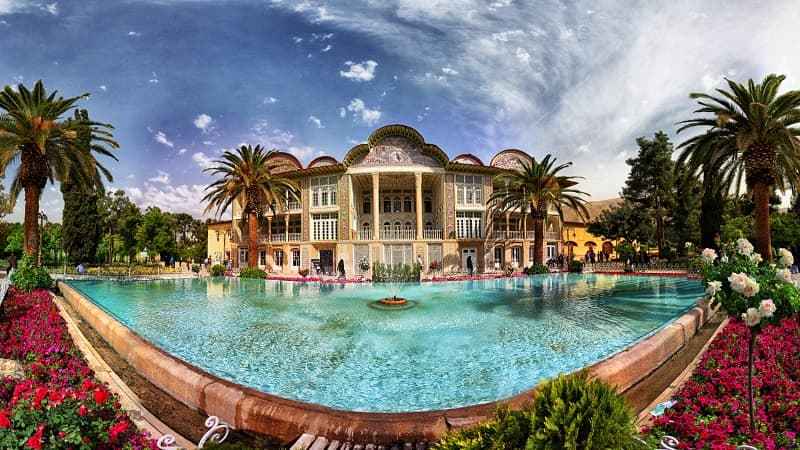 This next historic and religious landmark also belongs to Shiraz. Nasir ol Molk Mosque, which is also famous among the natives by the nickname “the Pink Mosque”, was built during the reign of the Qajar sultans. The impressive façade of the building is particularly captivating due to the vast use of stained glass and pink tiles. Visitors are encouraged to visit the mosque at noon when, as a result of light beaming through the windows, the walls and floor of the building shine with beautiful shades of various colors. 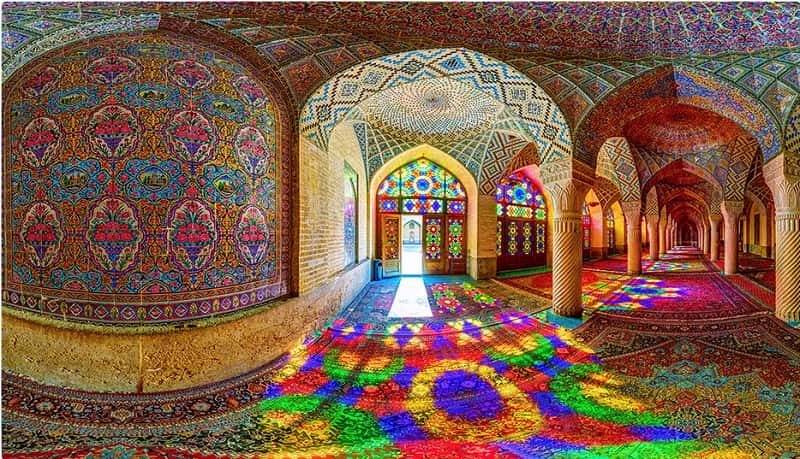 Isfahan is renowned for housing various gorgeous historic sites and landmarks among which Vank Cathedral, also known as the Church of Saintly Sister, enjoys a special status. Located in the mostly Christian district of New Julfa, this Armenian church was constructed during the rule of the kings of the Safavid dynasty. The interior of the cathedral is the perfect embodiment of the marriage of the Islamic and Christian styles of architecture. Frescos and gilded carvings, as well as tile work, are the predominant architectural elements of the church. A memorial in the Courtyard of the cathedral is reminiscent of the Armenian Genocide in Turkey. 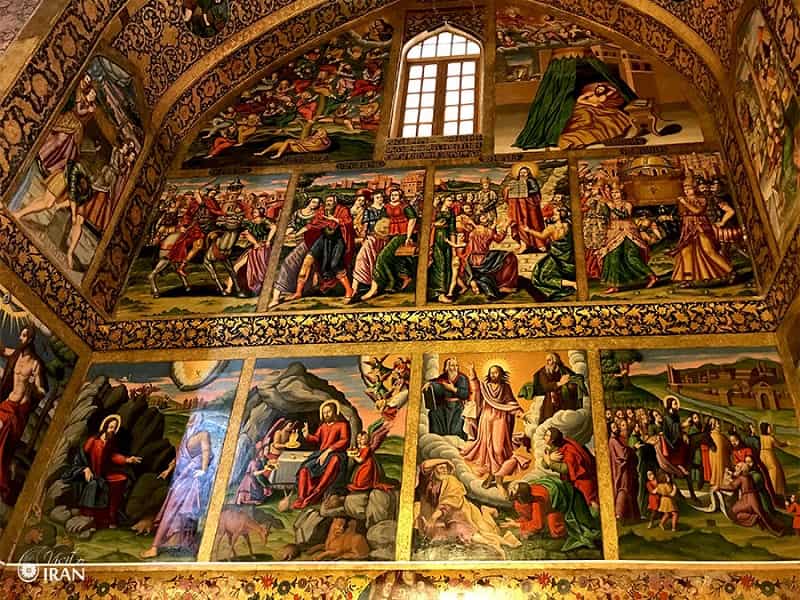