Yazd, a picturesque dry major city in Iran, also the hottest city north of the Persian Gulf coast, is located near central deserts of Iran.
One of the most interesting features of the city is that it is one of the largest cities almost entirely built out of adobe.
Due to its special climate, the city enjoys a number of unusual architectural constructions not to be seen frequently anywhere else in the world. One is magnificent wind towers, which were used to deal with long hot summer days. Natural refrigerators (yakhchals) that were used to store ice brought from glaciers in the close mountains are considered another example of the constructions. And the last but not least are Qanats. The climate of the city has led it to be one of the largest networks of Qanats in the world. Qanats are type of underground irrigation canals.
Yazd is also home of diverse religions, including Zoroastrianism. One of the most outstanding historical monuments from Zoroastrianism in the city, is the prominent Ateshkadeh (fire temple) which has been kept alight ceaselessly since 470 AD.
All in all, the city is recognized as one of the distinguished centers of Persian architecture, among them are:
Tower of Silence, Amir Chakhmaq Complex- a breathtaking must-see construction, Amir Chakhmaq Square, The Friday (or Congregation) mosque- arguably the city’s greatest architectural landmark, Masjid-e Jame (Friday Mosque)- dating back to the fourteenth century and an admirable fine Persian mosaics architecture, Yazd Water Museum, Yazd Market Square’s Clock, the cistern of Fatemeh-ye-Golshan, Hazireh mosque, Alexanders prison, Tomb of the 12 imams which dates back to the early 11th century, Dowlat Abad Gardens with a building with a beautiful large wind catcher (badgir)- built in the 1960s, Markar square, Rafieian’s Old House one of the most excellent examples of Iranian Traditional Architecture, Narin Castle dating back to at least 2000 BC, Old Town, and lots of other magnificent monuments that are breathtaking for tourists.
It is noteworthy that during his visit in 1272, Marco Polo described the city as a noble one with a great amount of trade including silk weaving industry.

It is also noted that over the past few years, Iranian government has put a great emphasize on improving healthcare system in the city, and under the HealthCare Reform Plan (HCRP), health tourism has become one of the first priorities to be reached in the city. 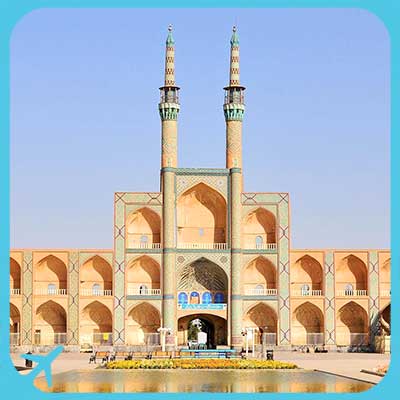