A guide to Iranian foods: What am I going to eat there?

Home » Blog » Tourism » A guide to Iranian foods: What am I going to eat there?

“Persian cooking” is considered an art and “Persian Food” is the well-deserved product of this artistic process. It is a pleasant act of mixing and cooking the colorful ingredients with a touch of magical herbs and flavorings. Ingredients which are particular to the Persians, either originally from the land of Persia, such as pistachios, almonds, saffron, mint, orange, grapes, and pomegranate, or have been brought to this land from various countries back in the day.

Iran is the only country in the Middle East, known as the “Four Season Country”, with four separate and distinct seasons, all arriving at the time they’re supposed to arrive. With a diverse climate, not solely limited to desert, growing all sorts of foods stuff have been made possible. In addition to that, Persians were distinctively famous for their intelligent engineering skills and water management, so they managed to transfer water and transform the arid lands into fertile oasis via underground aquifer facilities, during the ancient times.

Iran always owned its independent and prominent food identity, however, it owes part of its wide range of food spectrum, to its geographical locality on the center of Silk Road, neighboring Turkey, Afghanistan, Pakistan, former Soviet Union, and Arab states. Many historical incidents, such as the conquest of Persian Empire by Alexander the Great, the invasion of Arabs, Turks, Mongols, and Uzbeks, also played a significant role in the assimilation of foreign foods and recipes with Iranian foods. 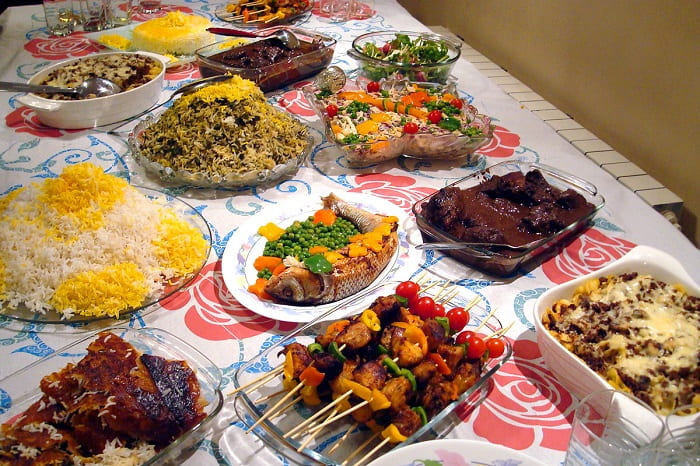 A table with different kinds of Iranian dishes

Rice is one of the dominant ingredients of Persian main dishes, alongside meat, various vegetables, and fruits, such as plum, pomegranate, raisins, quince, apricots, and prunes. Persian culinary art, comprises, mixing and using various flavorings such as saffron (Persians call it the Red Gold), cinnamon, turmeric, parsley, dried lime and other sour flavored ingredients in their dishes.

Iranian cuisine is a perfect combination of the ingredients, herbs, and spices, with a touch of time and patience. This precious art results in various unique tastes, mostly unfamiliar to the westerners. We’re dedicating this article to 8 Persian foods and cuisines, which are a bit closer to the heart than the others. You can try them the next time you visit Iran. You can also find them on the menus of Iranian restaurants all over the world.

Despite the great food diversity in Iran, the country has never closed its doors to the cuisines of other cultures. As you pass a street in Tehran, you would see many fast food restaurants serving different kinds of Western foods, including pizzas, burgers, pasta, lasagnas and so on. 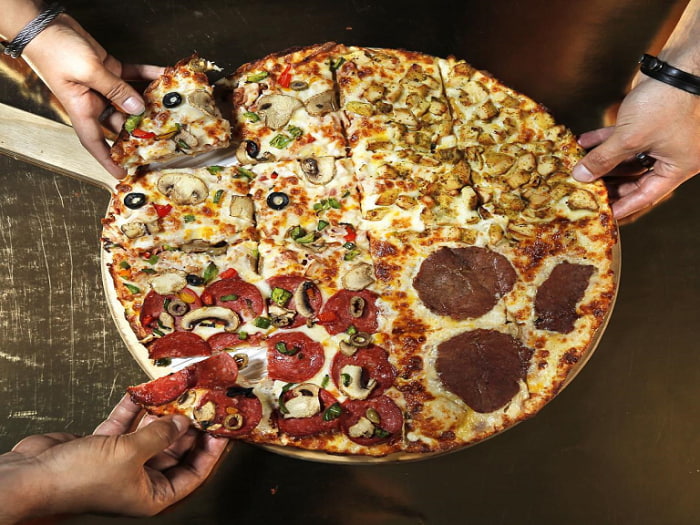 There are also restaurants in Iran that serve East Asian foods, including Chinese and Japanese restaurants. So as a tourist, you will never face problems regarding food options.

Amaze your taste buds with these 8 famous Iranian foods 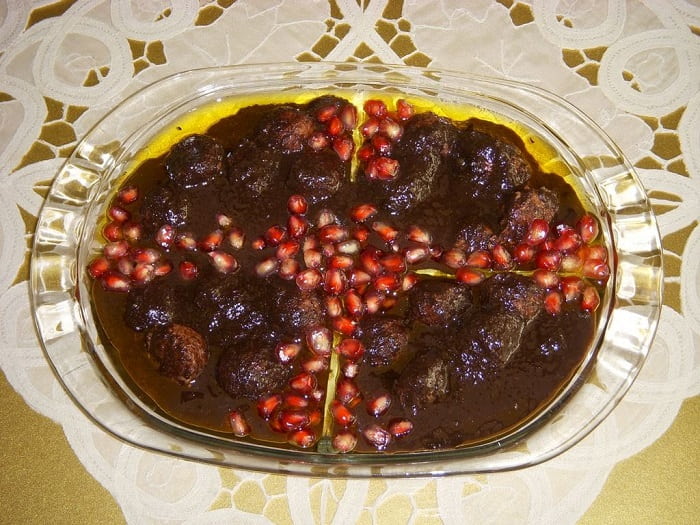 Fesenjan is left to cook until the oil from the walnut sits on top of the stew, which indicates that the stew has been cooked enough and is ready to be served. Khoresht-e Fesenjan is served alongside saffron rice. An interesting historical fact about this food is that, according to inscribed stone tablets dating back to 515 BC, the history of this dish dates back to ancient times of Persian Empire, during the Achaemenid era.

Qormeh Sabzi is made from pinto beans, herbs, lamb meat, chopped leafy greens such as parsley, coriander, and scallions. The beans and meat are cooked separately, the herbs and leafy greens are fried in a separate pan and are then added to each other. Fenugreek leaves are somehow the personality of this food, which also gives it a special aroma. 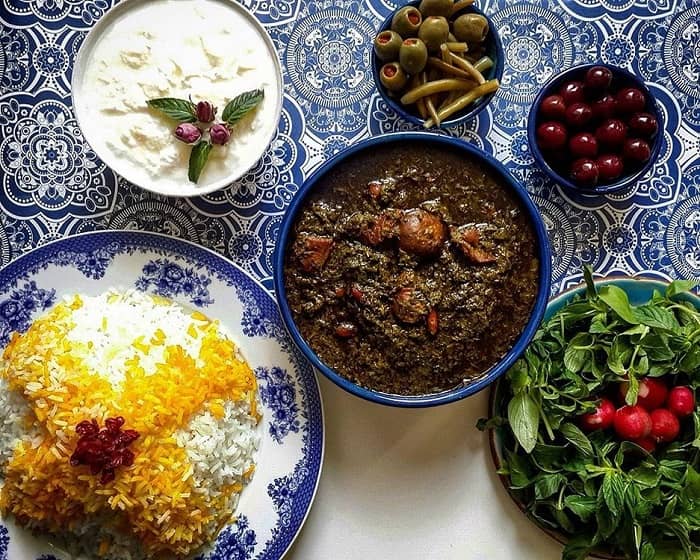 To satisfy the sour flavor obsessions, Qormeh Sabzi is seasoned with unripe grape juice (verjuice), unripe grapes, and dried limes. Together with this heavenly sour combination, saffron rice is served. Sabzi-Khordan or edible herbs (A plate of fresh herbs), and Shirazi Salad go perfectly with this dish.

This famous and traditional Persian appetizer consists of finely chopped cucumbers, tomatoes, and onions. The tomatoes are usually chopped to the point where their seeds and water, become a part of the salad’s dressing. The dressing mainly consists of, olive oil combined with either verjuice (unripe grape juice), grape vinegar or lemon juice. They add the dressing after chopping the ingredients, also adding dried mint leaves to the mix, and let it sit a while before serving until the dressing is beautifully absorbed. 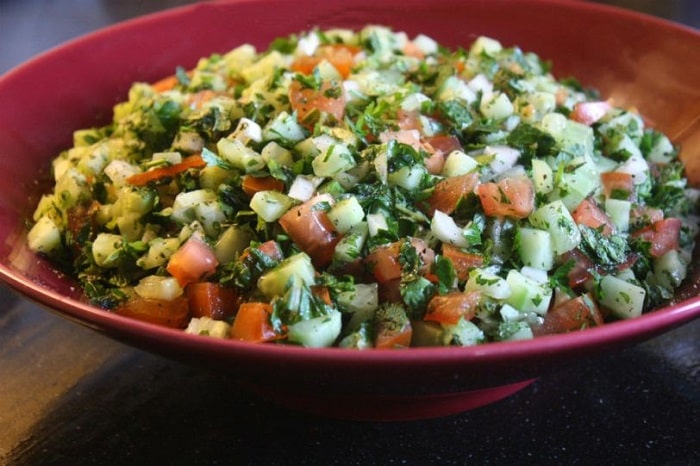 Tourists who have already traveled to Iran might be familiar with this name, as one of the well-known restaurants in Tehran’s Grand Bazaar is particularly famous for serving this food. Made from deboned cooked chicken, rice, brewed saffron, egg yolks, thick or full-fat yogurt, butter (oil), and barberry, this dish is either served as the main dish or a side dish. When served as a side dish, Tah-chin, is cooked without the chicken, and plays the role of “Tah-Dig” but thicker (Tah-dig: Fried rice at the bottom of the rice pan). In this particular case, it is served alongside various stews such as Eggplant stew (Persian: Khoresht-e Bademjan). 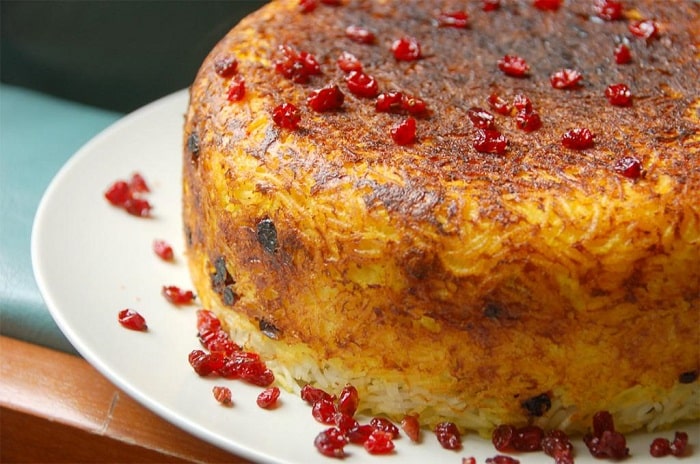 Cooked chicken is marinated in the egg yolk, yogurt, brewed saffron, butter (oil) mix and sits in this mixture overnight. At the time of preparation, the boiled rice is mixed into the rest of the yogurt mix and is layered into a rice copper pot, with chicken mixture. It is then put into the oven, in the moderate heat, until it cooks for one and a half hour. The longer it is cooked in lower temperatures, the moister it will be in the end. Barberry is spread over Tah-Chin when it is ready to be served.

In Persian cooking, rice is cooked in various ways. The most common way of cooking the rice is boiling it and letting it brew. After it is completely cooked, brewed saffron is separately mixed with a bit of rice, and spread over the rest of the rice on the platter, before being served. This is exactly the case with Barberry Rice or Zereshk-Polo. The finishing touches of taste and decoration are done at the time of serving, by spreading more than a handful of oil-fried barberries, on the rice. 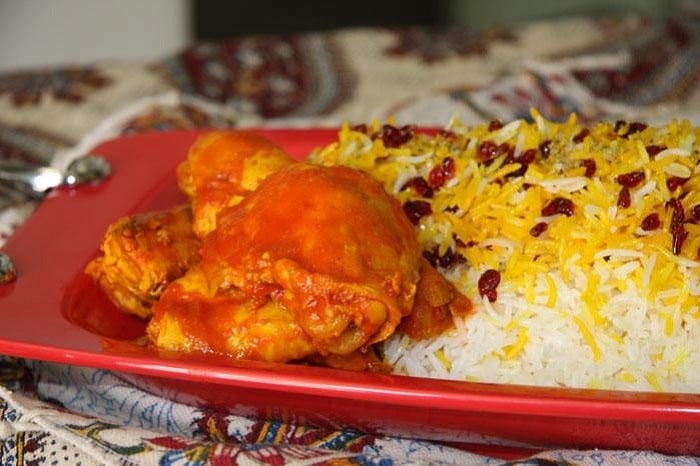 Zereshk-Polo is often served alongside simply cooked chicken. Brewed saffron is also added to the cooked chicken while it is still on the heat. It is essential not to put the lid on after adding the saffron, as the chicken will lose its saffron color.

Another way to cook rice in Persian cooking is to mix it with different herbs, vegetables, meat, beans, nuts, dried fruit (raisins), orange pill and thin noodles (Persian: Reshteh). In Farsi, they call it “Polo”. “Polo”s are usually served independently. Loobia-Polo as one of the famous members of this group is often served with traditional Shirazi Salad, as these two seem like inseparable siblings.

Meat and finely chopped green beans are cooked, mixed and fried in a separate pan, with added tomato paste. A layer of Lavash bread or thin potato slices are laid at the bottom of the rice pot on a thin layer of hot oil. This will make the “Tah-dig”. The rice is boiled until it’s half cooked. It is then layered with the meat mixture over the layer of “Tah-dig”. 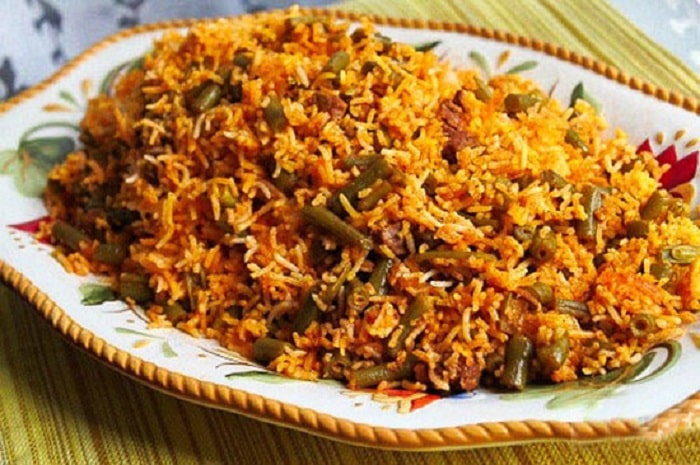 Different spices, including cinnamon, are used in cooking Loobia-Polo, which make it incredibly aromatic. These spices are particular to this food and are added to the rice while layering it with the meat and green bean mixture. The lid is then put back on the pot, and is left on the medium heat until it’s completely cooked.

Persian noodle and bean soup, is quite famous, even among the foreigners and travelers, especially if they have traveled to Iran during Nowrouz (Persian New Year), and cold days of autumn and winter. It is particularly a complete meal, as it contains, pinto beans, lentils, leafy greens, and peas. It is topped with mint oil, crunchy fried onions and sour whey (Persian: Kashk). 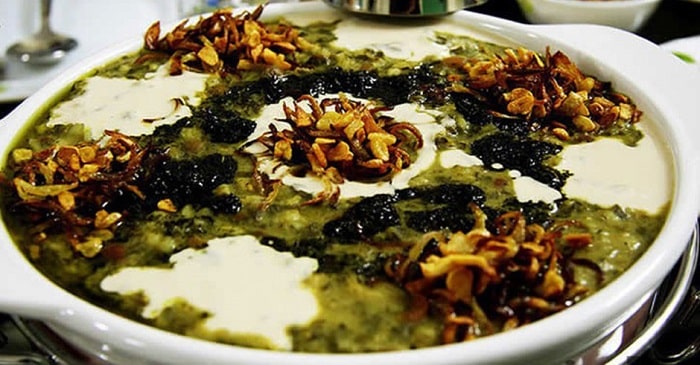 Ash-e Reshteh is also traditionally cooked as what Iranians call it “Nazr”, which is a way of thanking God for answering their prayers, such as a patient being cured, being accepted in the university, or a problem is solved.

No Iranian breakfast table is complete without the glowing presence of jam or as Iranians call it “Morabba”. Jams are made from a wide range of fruits and vegetables such as strawberries, cherries, sour cherries, plums, pears, quinces, figs, carrots, orange and lemon peels, and even Damask rose petals. These ingredients are covered with layers of sugar and sit a few hours before being cooked. 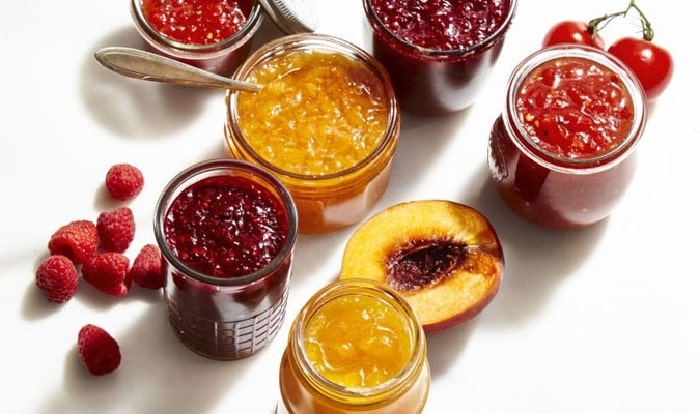 Iranian jams are made of different kinds of fruits and vegetables.

Morabba, aside from its decorative role, is served both as a sweetness on the breakfast table and a dessert on lunch and dinner tables. There might be various jams on the table, so prepare yourself to be mesmerized by their view and taste.