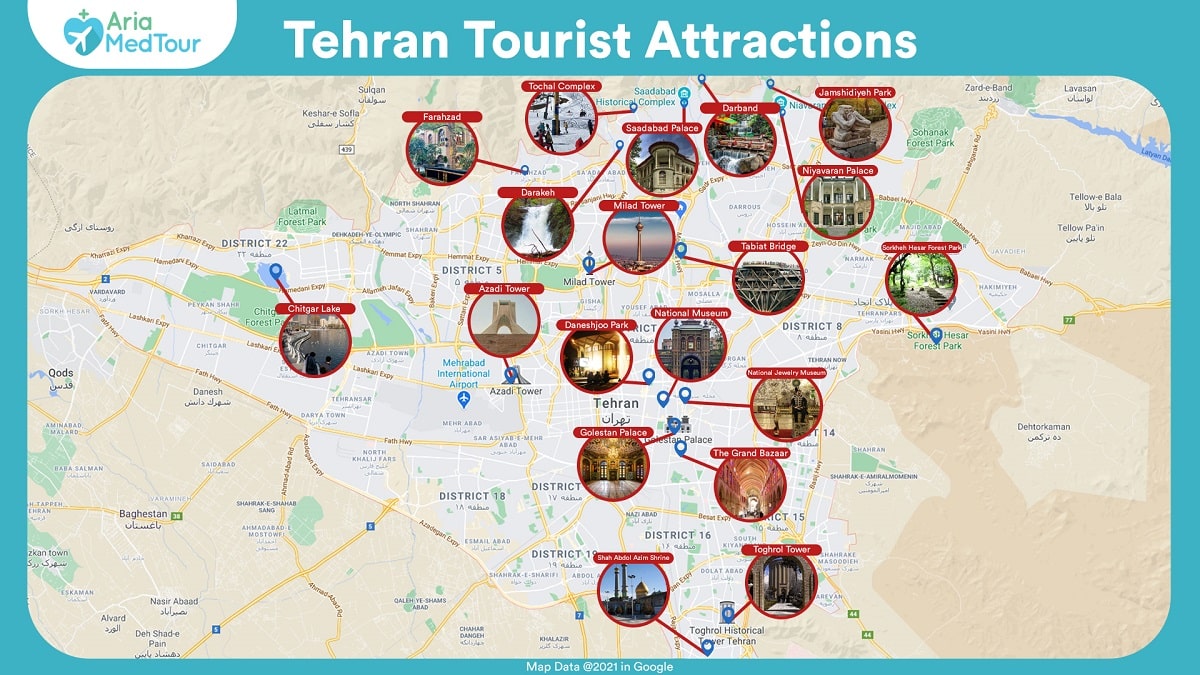 The Golestan palace which means palace of flowers, is a royal complex of buildings set around a wonderful garden with planted areas and pools. The Qajar family declared Tehran the Iran’s capital in 1779 and made this palace its seat of government. The palace embodies an amazing integration of traditional Persian art and architecture with 18th century technology and influences of western architecture. The palace is enriched with stunning patterns and tiles and has been a source of inspiration for Iranians architects till this very day. The Golestan Palace which is among the oldest tourist places of Tehran, is the heart of Qajari architecture and art. 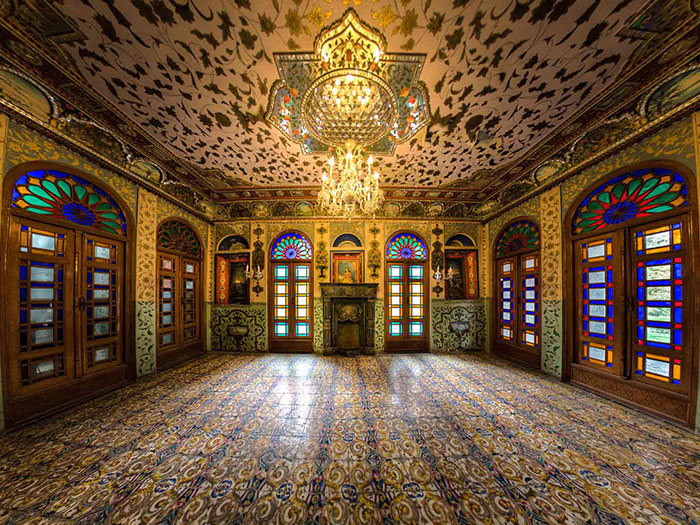 The Saadabad Palace is a cultural complex of buildings located in the foothills of Darband. This palace was first used by Qajar monarchs as a summer palace during 1794-1925. Later on, extra villas and palettes were added to the palace. During the Pahlavi dynasty it extended a larger area and eighteen additional palaces and new gardens were built, exhibiting Iranian architecture. The Saadabad Palace was the summer residence of Reza Shah and Mohammad Reza Sha, during the Pahlavi dynasty. After the 1978 revolution, the palace complex became a museum. The white palace and the green palace of this complex are open to public. The current presidential palace is located near to the Saadabad complex. 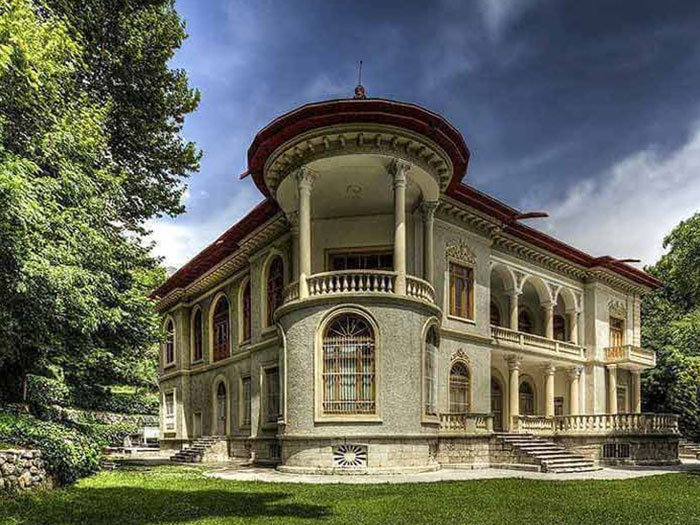 The Grand Bazar which is located in the heart of Tehran and one of its oldest areas, is among the city’s top tourist attractions. This historical market filled with shops and haggling customers has over 10 kilometers of labyrinthine corridors. There are all sort of goods from jewels to carpets and pans for sale in the commercial center. The bazaar was traditionally split into alleyways and corridors, so each had its own type of goods such carpets, spices, copper, etc. currently you can find modern goods, while there are also many traditional corridor merchants. You will find the Grand Bazaar a place enriched with history and character. 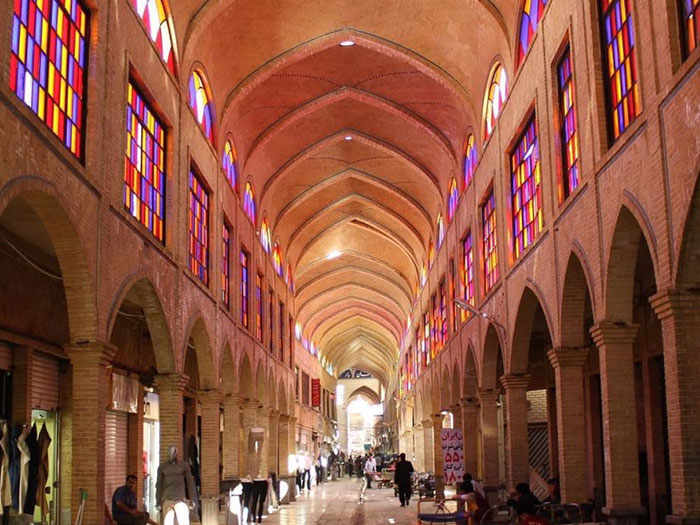 Milad Tower is the tallest building in Iran. With a height of 435 meters (1,427 ft), the multi-purpose tower is the sixth tallest tower and the 17th tallest freestanding structure in the world. Located between Shahrak-e Gharb (Qarb Town) and Gisha district in northwestern part of Tehran, the tower is considered one of the best modern attractions of the capital of Iran, being visited by many people who mainly go to the place to watch Tehran from a very high positon in the upper part of the tower. The tower also enjoys a revolving restaurant, art galleries and luxurious fast food restaurants and cafes. A five-star hotel, a world-trade center, a convention center, and an IT park are some other features of the complex 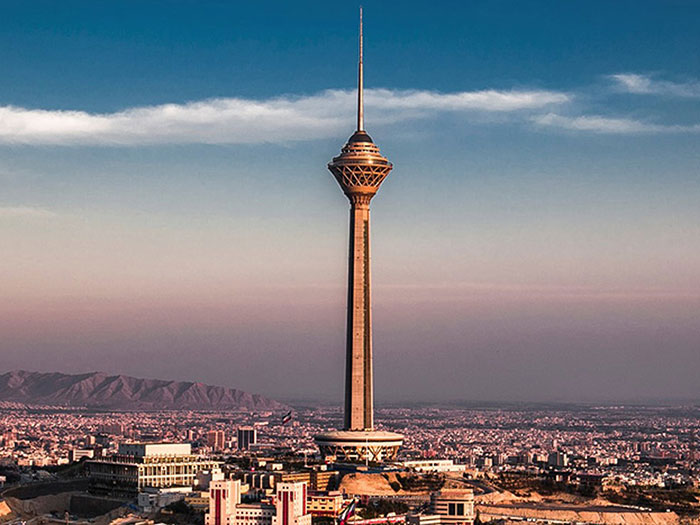 The Azadi Tower which means freedom tower, is an amazing combination of Sassanid and Islamic architecture elements. The tower is built out of eight thousand marble stones from the Isfahan region. This tower is 50 meters high and was built in 1971, it is a part of the Azadi complex, standing in the center of the Azadi Square with an area of 50,000 square meters. The square contains several fountains and a museum. The Azadi Tower wonderfully combines modern technology and architecture with ancient Persian culture. 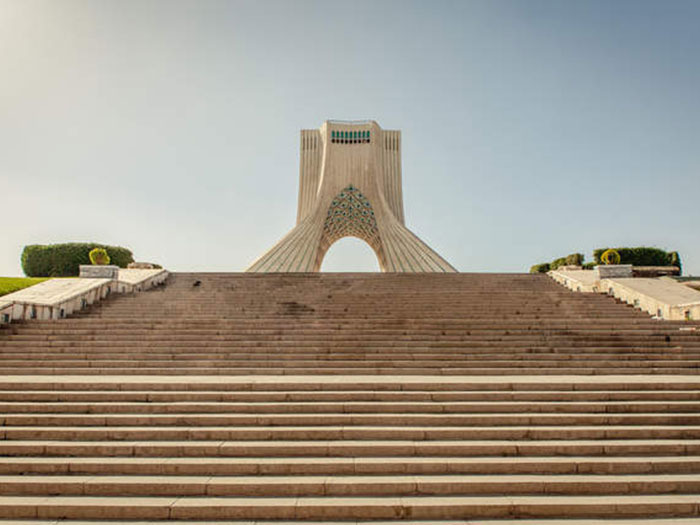 Tochal complex is located in the north of Tehran, providing various sports facilities such as skiing, telecabin and climbing. The area has a wonderful landscape and mountain fresh air. Tochal peek is 3,993 meters high. You can accept the challenge of trekking the mountain, otherwise you can use the telecabin to go up the mountain or to access ski resorts or various recreational facilities. Tochal telecabin has a length of 7500 meter, making it the world’s longest gondola lift. The ski resort has snow for about 8 months a year. The Tochal ski resort is the world’s 4th highest ski field. 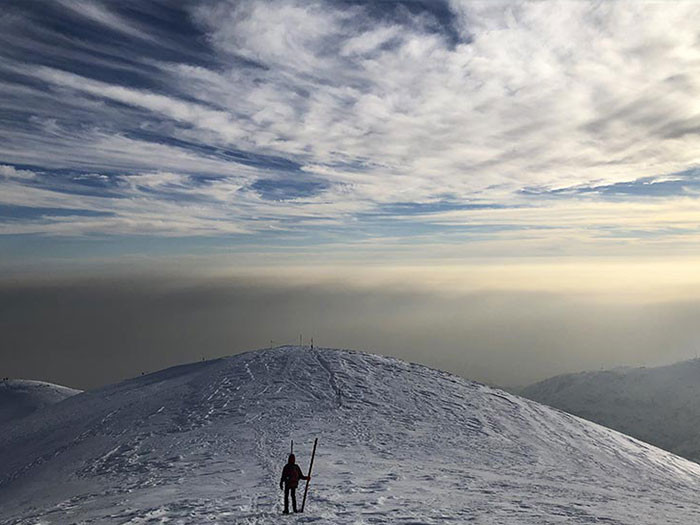 The National Jewels Museum has a collection of some of the world’s most famous and stunning jewels. This museum which is located in Iran’s national bank, includes crowns, gemstones, ornamental guns, royal emblems, bejeweled shields and swords, etc. the majority of the pieces on display were acquired by the Safavid kings, but there are also many items taken by Nader Shah during his conquest of India, such as thrones, diamonds and sapphires. The museum also exhibits crowns of the Pahlavi and Qajar kings. 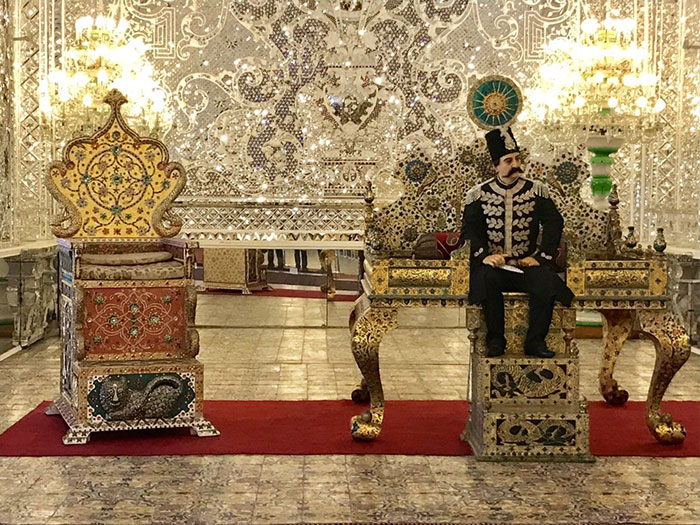 The National Museum of Iran which is also known as the Museum of Ancient Iran, boats a stunning collection of cultural and archeological treasures and objects. From Stone Age items to pottery and coins, the museum houses an impressive collection of artworks from prehistoric Iran to the end of the Sassanid era. This museum exhibits Iranian artworks in various fields of carpets, miniature painting, pottery, calligraphy and glassware. The building of the museum itself is a fascinating modern construction which was designed in the 20th century inspired by the Sassanian architecture. 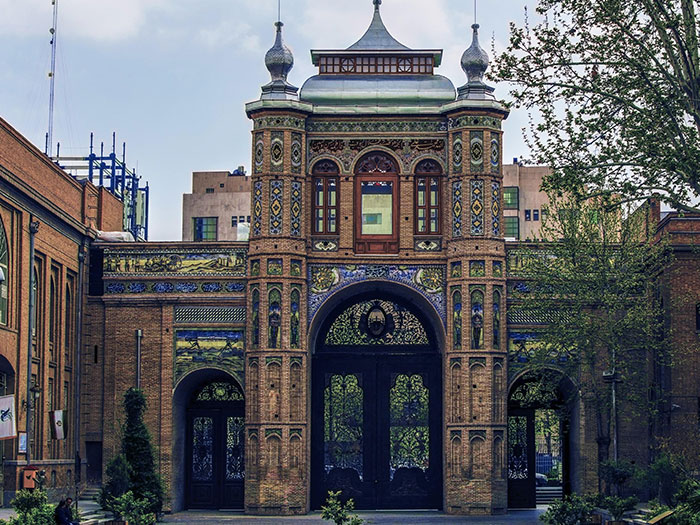 Also known as Stone Garden, Jamshidiyeh Park climbs steeply up the lower reaches of the Alborz Mountains and offers a clean, quiet atmosphere in which to enjoy the views and escape the smog. It’s the sort of place you could happily while away an entire afternoon. Fresh air and lush surrounds are enough to merit a trip to this out-of-the-way spot, but the outstanding views of the city below are what makes it a must-see. The higher you climb, the better the views become but if you don’t feel like a hike 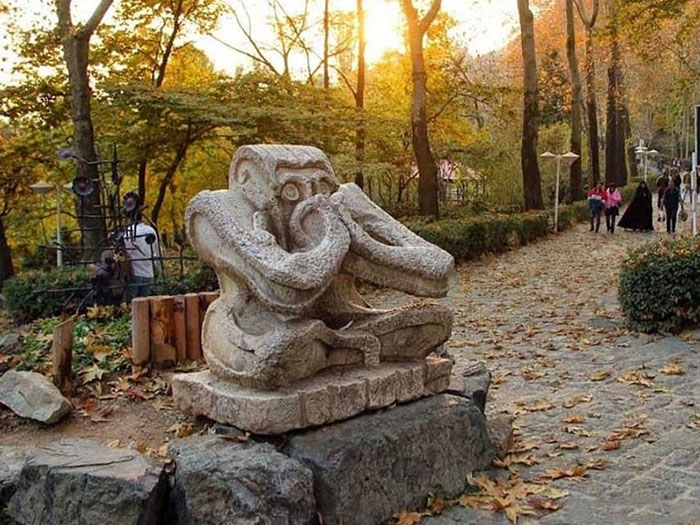 This park is constructed in a surface area of 3200 square meters. Tehran’s Daneshjoo park is located in the neighborhood of city theater complex. The park is the perfect place to interact with young students who relax in the park and are from several universities in the neighborhood. Usually there are street performances inside the park and in front of the city theater. 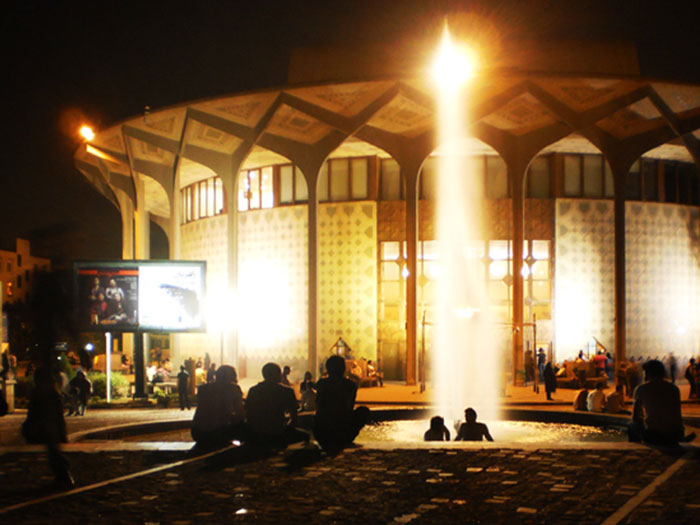 Built between 1958 and 1968 this remarkable palace contrasts clean-lined functionality on the outside with opulent, European-royal-style furniture and enormous, intricately woven carpets inside. Highlights include the magnificent Kerman carpet showing Iranian kings right back to the Achaemenids as well as some European sovereigns, including Napoleon Bonaparte; the shah’s walk-in wardrobe full of dozens of uniforms; a selection of Farah Diba’s very stylish gowns; and the retractable roof that opened the centre of the palace to the sky. 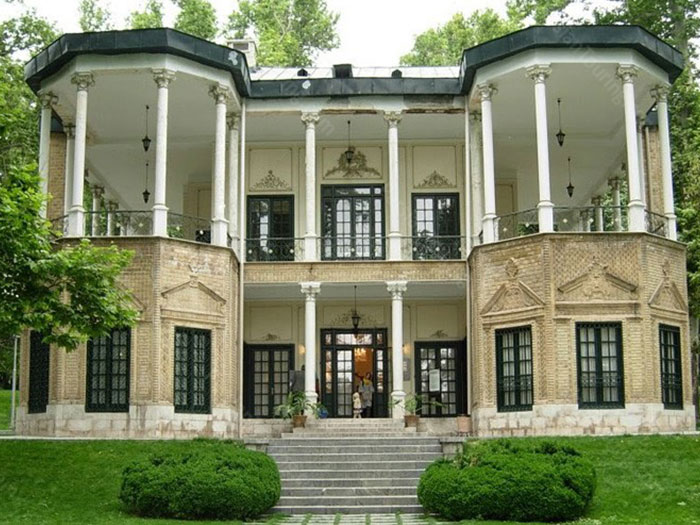 The Nature Bridge or Tabi’at Bridge is the largest pedestrian overpass built in Tehran, Iran. The 270-meter bridge connects two public parks—Taleghani Park and Abo-Atash Park—by spanning Shahid Modarres Hwy, one of the main highways in northern Tehran. It provides a good view of Tehran and it’s ok to hang there till midnight. After enjoying the bridge make sure you will find the Wooden Road International Food-court near the bridge and enjoy the atmosphere. 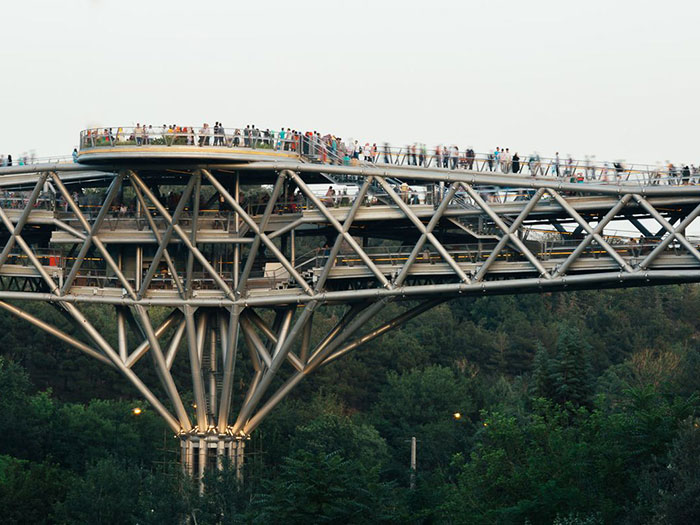 Rey’s main attraction is this shrine built for a 9th-century descendant of Imam Hossein. The mausoleum has elaborate tilework; a golden dome; a pool in the courtyard; a 14th-century sarcophagus with intricate carvings, constructed from betel wood; and enough mirror tiles to make you dizzy. In the same complex is a shrine to Imam Hamzeh (brother of Imam Reza). Women need to wear a chador, available at the entrance. 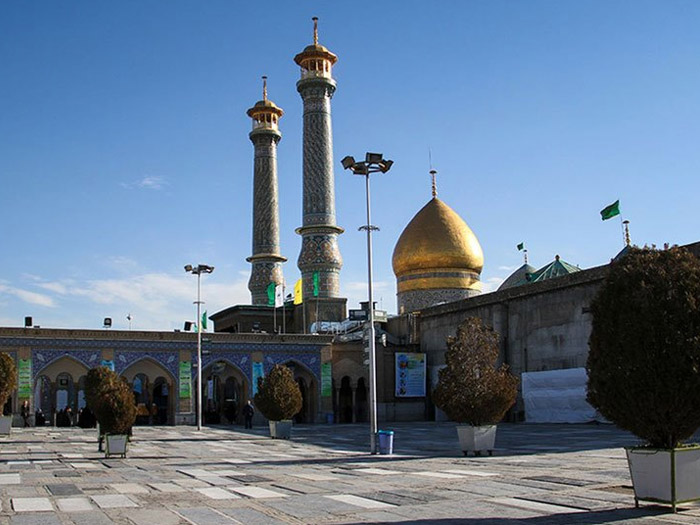 Housing more than 100 pieces dating from the 17th century to the present day, this is a great place to see the full range of regional patterns and styles found in Iran. Look out for unique designs such as the Tree of Life with Kings and Notables. The permanent collection is downstairs, while upstairs is sometimes open for temporary exhibitions. 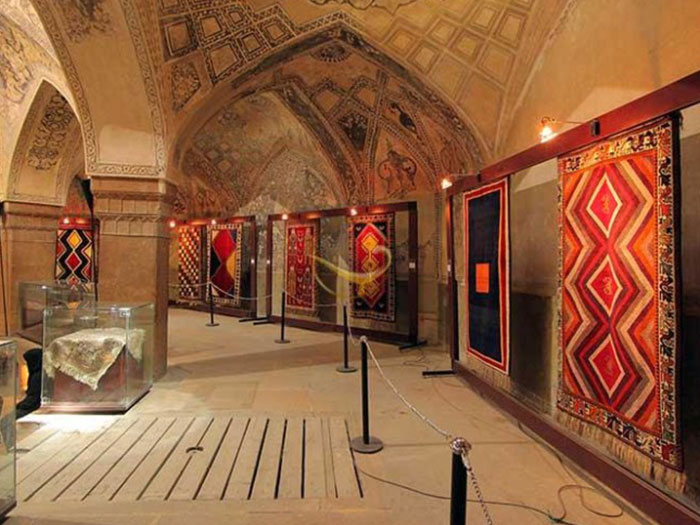 Darband is an old village in Shemiran, located to the north of the Saad Abad Garden, Tehran, the capital city of Iran. With its cool summers, Darband is a highly visited tourist attraction in Tehran. The Darband River passes through this village. It is the beginning of a popular hiking trail into Mount Tochal, which towers over Tehran. A chairlift is also available for those not interested in hiking. The initial start of the trail at Darband is about 250 metres long and is dotted with a number of small cafes and restaurants. 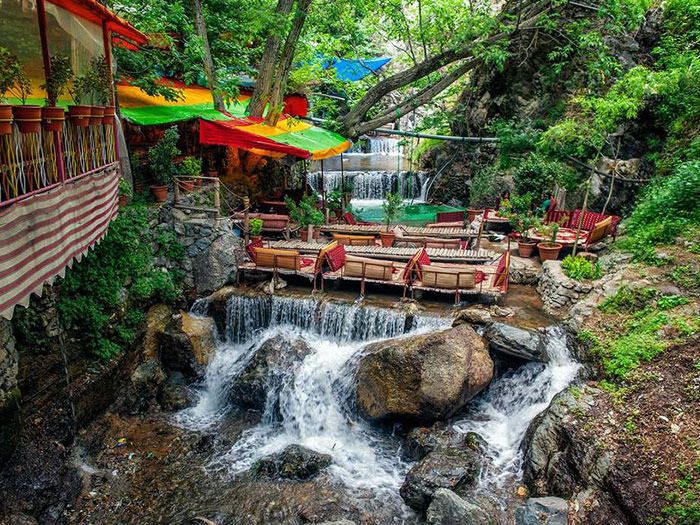 This village, at 1700m elevation and just north of the notorious Evin Prison, is one of Tehran’s most pleasant urban escapes. From the cluster of riverside restaurants near the central car park, paths head up through the village and connect with hiking trails across and up the mountainside. It’s possible to hike from here to Station 1 of Tochal Telecabin and beyond. 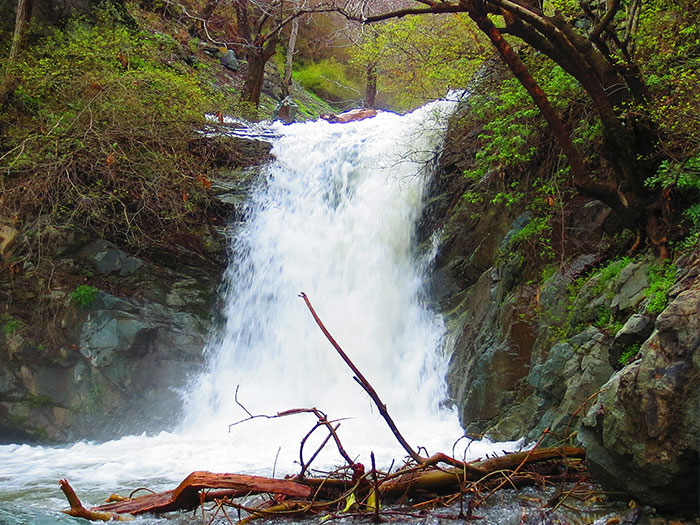 Tuğrul Tower is a 12th-century monument, located in the city of Rey, Iran. Tuğrul Tower is near Rashkan castle. The 20 meters tall brick tower is the tomb of Seljuk ruler Tuğrul Beg, who died in Rey in 1063. Originally, like other monuments of its time, it was capped by a conical dome, which would have added to its height. The dome collapsed during an earthquake. It is said that the tower is also the grave of Toghrol, the Seljuk king, because of his interest in astronomy. 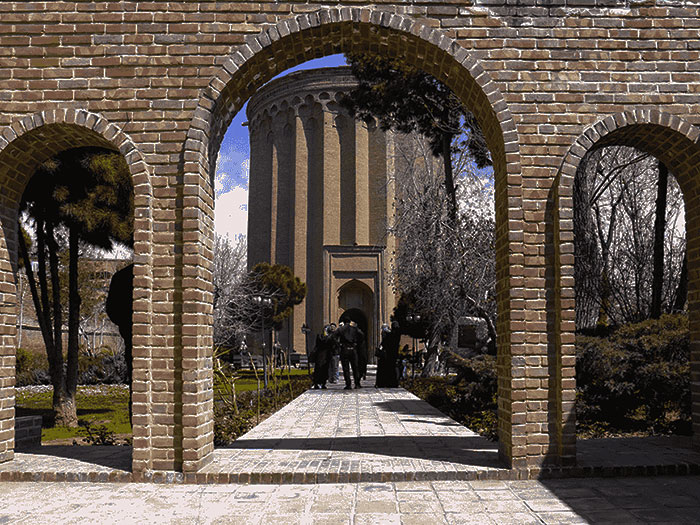 Imamzadeh saleh is a famous and ancient tomb (mosque) located in Tajrish region, Tehran for more than five centuries. The main touristic aspect of this tomb is the combination and concordance with the olden contexture of Tajrish grand bazaar which is located right next to it as a resemblance and symbol of old Tehran. The 70 years old tiling turquoise dome accompanying its two minarets made a great view for tourists to do photography. You can visit this religious site almost every season and then drift in the Tajrish grand bazaar where you can taste different Persian souvenirs such as any kinds of nuts, fruits and vegetables, spices and Persian drinks in local shops you can also find the colorful prayer breads, jewels and other desirable accessories there. 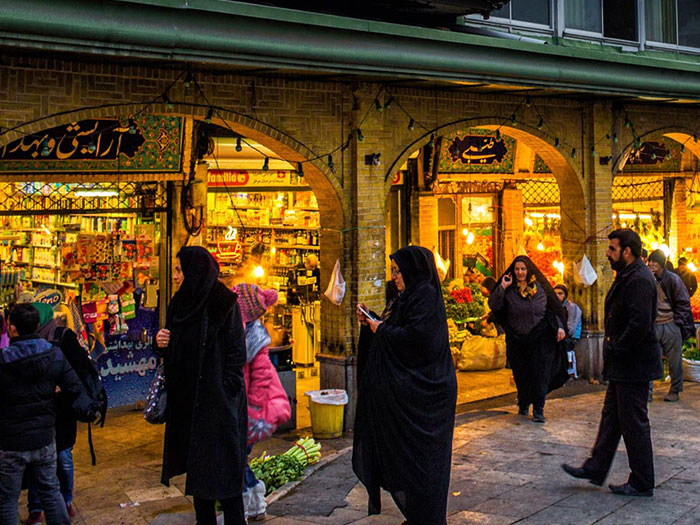